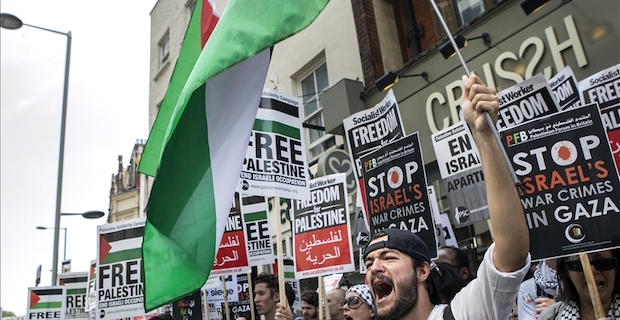 A Conservative Party member of the British parliament has been criticized because of a tweet in which he described pro-Palestinian protesters “primitive.”

Michael Fabricant in his post, which also included a video that appears to be showing some protesters clashing with police, said: “These primitives are trying to bring to London what they do in the Middle East.”

The Hope not Hate, an anti-racism campaign group reacted to the post, which Fabricant later deleted, and urged the Conservative Party to suspend the MP, accusing him of “hateful racism that stirs up division."

“The tense situation requires steady leadership from people who want to bring communities together, not hateful racism that stirs up division,” it said. “The Conservatives must suspend Michael Fabricant for this disgraceful comment.”

Thousands of people demonstrated in London and in other cities in the UK over the weekend, calling on the UK government and international society to intervene to stop Israel's air raids that have killed almost 200 civilians in Gaza.

The director of British Future, a thinktank, also reacted to the MP's comment.

“Anybody who realises that it is racist to hold British Jews responsible for Israeli policy should also be able recognise the racism here in Michael Fabricant’s tweet,” Sunder Katwala, its director wrote on Twitter.

The death toll from Israeli attacks on Gaza Strip has risen to 197, including 58 children and 34 women, according to the Palestinian Health Ministry. Media offices, health centers and government ministries are among the structures targeted.

Tensions spread from East Jerusalem to Gaza after Palestinian resistance groups there vowed to retaliate against recent Israeli assaults on the Al-Aqsa Mosque and Sheikh Jarrah neighborhood.

Israel occupied East Jerusalem, where Al-Aqsa is located, during the 1967 Arab-Israeli war. It annexed the entire city in 1980 in a move never recognized by the international community.

Keywords:
CONSERVATIVE PartyBritish ParliamentBritish MPMichael Fabricant
Your comment has been forwarded to the administrator for approval.×
Warning! Will constitute a criminal offense, illegal, threatening, offensive, insulting and swearing, derogatory, defamatory, vulgar, pornographic, indecent, personality rights, damaging or similar nature in the nature of all kinds of financial content, legal, criminal and administrative responsibility for the content of the sender member / members are belong.
Related News