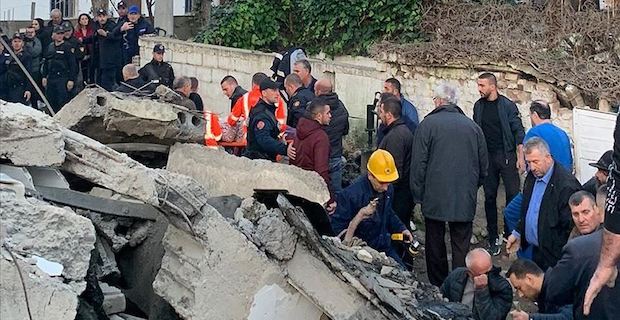 A 6.4 magnitude earthquake hit western Durres city of Albania on Tuesday at 3.54 a.m. local time (0254GMT), said the country's Institute of GeoSciences, Energy, Water and Environment. According to a statement by the country's Defense Ministry, the earthquake has killed at least seven people, one of whom jumped from a window due to panic. Turkey's Ambassador to Tirana Murat Ahmet Yoruk said Turkey is preparing to send a search and rescue team as well as a medical team.

"We have got in touch with Turkey's Disaster and Emergency Management Presidency [AFAD] after meeting with the authorities of Tirana. They are preparing to send a search rescue team as well as a medical team during the day," Yoruk told Anadolu Agency.

"AFAD search and rescue team, along with 3 vehicles and National Medical Rescue Team (UMKE) from the Ministry of Health are traveling to Albania to support search and rescue operations after the 6.2 magnitude earthquake," said AFAD on its social media account.

He added that about 300 to 500 buildings collapsed in Durres city.

"According to preliminary information, between 300 and 500 buildings collapsed. Some Turkish citizens were staying in a hotel in the port city of Durres. The hotel collapsed, but they have survived the disaster with minor injuries. One of them had a problem with the waist. So we sent an ambulance from Tirana," he said.

The ambassador also said the Turkish embassy also sent a vehicle to evacuate the citizens in Durres, and added: "They are in good condition. Naturally, they are scared but we are expecting them to our embassy to rehabilitate them before returning to Turkey".

Yoruk added that so far they have not received a request for assistance with Turkish citizens living in the country.

Meanwhile, President of Serbia Aleksandar Vucic offered help to Albania in a letter of condolence to the President Ilir Meta and Prime Minister Edi Rama.

"It is difficult to anticipate such catastrophes and stop the relentless force of nature, but if Serbia can help in any way, we are ready to provide, within our means, every assistance in the aftermath of the devastating earthquake.

"We are sadly looking at pictures of the devastation in Durres and other places in Albania. Allow me to extend my sincere condolences to you and the families of the dead, as well as to express my sympathy for those who seek your loved ones," said Vucic's letter.

"It is a dramatic moment where we must nevertheless keep calm, stand by each other and face this blow, then we will do our best and with great friends at hand we will overcome this situation," said Rama.

He also listed leaders that offered help, including Turkish President Recep Tayyip Erdogan, as well as countries such as North Macedonia, France, Montenegro, and Germany.

At least 330 people injured due to earthquake

The Albanian Health Ministry said at least 330 people were injured due to the earthquake.

The epicenter of the earthquake was located 15 kilometers (9 miles) off Durres city, at a depth of 38 kilometers (23 miles).

The quake was felt in other cities of Albania, particularly in the capital Tirana, and in neighboring countries of North Macedonia, Kosovo and Montenegro.

It also caused communication problems and power cuts in Albania.

The country's Education Ministry said the schools were suspended for a while for security.

On Sept. 21, a 5.8 magnitude earthquake in the country left over 130 people injured and more than 600 buildings damaged.

Keywords:
EarthquakeAlbania
Your comment has been forwarded to the administrator for approval.×
Warning! Will constitute a criminal offense, illegal, threatening, offensive, insulting and swearing, derogatory, defamatory, vulgar, pornographic, indecent, personality rights, damaging or similar nature in the nature of all kinds of financial content, legal, criminal and administrative responsibility for the content of the sender member / members are belong.
Related News