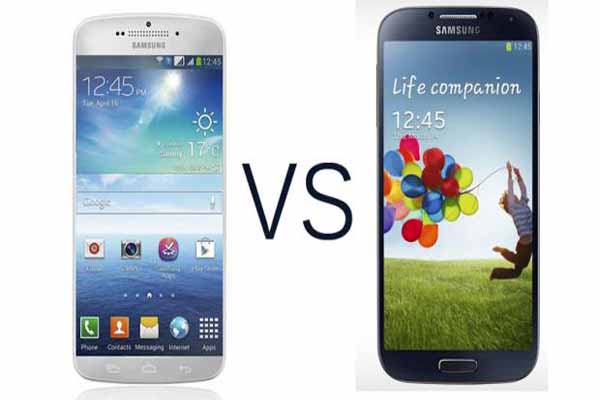 Samsung’s Galaxy S5 launch is just around the corner, the “Unpacked 5” event is set to be happening on Monday 24 February at Mobile World Congress 2014 in Barcelona, and it’s thought the Galaxy S5 will be the star of the show, if rumours, logical deduction and a healthy dose of assumption prove to be correct. While not everything is known down to the last detail, and even the broad brush strokes which have been extensively and consistently rumoured have not been officially confirmed, we do have a picture of what the Galaxy S5 will be like, and by this stage in the game it’s not unreasonable to think a lot of it will turn out to be true. So how does this perceived Galaxy S5 compare to its immediate predecessor, the Galaxy S4? We thought it’d be interesting to take a look based on what we’ve heard from the rumour mill, partly to see how far the Galaxy S5 may have come, but also as it’ll still be intriguing to see how much was correct or incorrect when the official product actually emerges soon.

While the phone’s design and display features are two distinct elements, in truth they’re also utterly inseparable – you can’t have a smartphone without a touchscreen, and the size of the touchscreen goes a long way to dictating the shape, handling properties and other design elements of the device.

Samsung’s Galaxy S4 packed a 5-inch Super AMOLED display with a full HD 1080p resolution at 441 pixels-per-inch (ppi). This provided excellent image quality with a sharp, bright and colourful picture with great contrast. The size was also nice, being both large enough to give an enjoyable multimedia viewing experience but not so large as to become unwieldy in the hand. The Galaxy S4 managed to add this larger display without expanding the previous Galaxy S3’s proportions much at all, instead the bezel simply got narrower, which gave the added effect of a more streamlined appearance.

With the Galaxy S5, the most consistent rumours point to a 5.25-inch display, barely much bigger than the Galaxy S4. Again, thin bezel trickery is alluded to for this version, so don’t expect the chassis to get much larger either, though some small expansion is perhaps unavoidable.

There are rumours of multiple versions of the Galaxy S5, however, which means we have seen several sets of specs. It’s thought there may be a mid-range model with a similar 1080p resolution to the Galaxy S4, as well as a higher-end premium edition boasting a 2K  Ultra HD or QHD resolution somewhere in the region of 2560x1440 pixels and with a pixel density as high as 560ppi.

There’s also plenty of rumour-debate on the subject of the screen tech itself. While some sources seem to imply the Super AMOLED is staying put, there’s also been some talk of types of advanced LCD coming in as a replacement, the so-called Low Temperature PolySilicon (LTPS) LCD and PLS LCD (Samsung’s Plane-to-Line Switching tech, seen notably on the Nexus 10) are two such possible candidates.

The other subject of much discussion is that of build materials. The Galaxy S4 had a fairly uninspiring build and design made with Samsung’s usual shiny plastic, giving a cheap look and feel even if, durability wise it wasn’t too bad at all.

Allegations of a metal-built Galaxy S5 are now very long-in-the-tooth, but throughout the whole rumour cycle there have also been plenty of contradictory claims that the plastic will stay in one form or another, although since the Galaxy Note 3 there’s been a lot of movement from Samsung on its soft-touch, faux leather plastic back panels and some think we’ll see this on the S5 too.

Amongst the suggestions for two possible new handsets there have been rumours saying one will be plastic and the other metal, while some have said both will be plastic. Some reports even claimed a metal frame surrounded by plastic panels. Of the metals named as possible build materials both aluminium and steel have been mentioned, though not just any old steel – diamond coated stuff, apparently. There’s also been on and off talk of Carbon Fibre, on occasion, and potentially waterproofing certifications.

What about the overall shape, look and feel of the Galaxy S5? Well, according to a Samsung executive the company perceived that consumers felt there wasn’t enough of a difference between the Galaxy S3 and the Galaxy S4, and it’s aiming to remedy that this time round. Essentially, we’ve been told to expect a substantially different and distinct chassis on the Galaxy S5. While it isn’t concrete, a Samsung patent for a new phone design leaked onto the web a little while ago and does show something that would fit the bill: a super-thin phone with an edge-to-edge display, a slightly recessed back panel and uniquely contoured shapes at top and bottom. Talented fans have even gone on to render this design to see how a finished product might look, with an aluminium surround and plastic, faux-leather back panel. The end result is pretty compelling, to say the least. We can only hope. Recently there’s even been word of a gold coloured model.

Samsung’s Galaxy S4 came out in a number of different processor variants for different regions, however, for the UK and US only one was available – the i9505 model fitted with a Qualcomm Snapdragon 600 APQ8064T chip. This uses a quad-core Krait 300 architecture clocked at 1.9GHz with an Adreno 320 graphics processing unit (GPU) and 2GB of RAM.

While this hardware is pretty fast, devices running Qualcomm’s Snapdragon 800 chip are now noticeably smoother. Samsung subsequently released the i9506 model with a Snapdragon 800 MSM8974 using Krait 400 architecture at 2.3GHz, an Adreno 330 GPU and 2GB of RAM.

As if all that wasn’t complicated enough, the Galaxy S5 is rumoured to come in a number of possible processor configurations.

One set of rumours says we’ll see a variant with a quad-core Qualcomm Snapdragon 805 chip clocked at 2.5GHz with 3GB of RAM.

However, benchmark results have emerged via AnTuTu showing a version with an MSM8974AC chip – that’s a Snapdragon 800 clocked at 2.4GHz with an Adreno 330 GPU and 3GB of RAM. This is suspected to be the supposed “higher-end” model as it also packs a 2K display resolution, and it’s labelled as the G900R4.

However, while previously Samsung Exynos chip handsets have largely just landed in Asia, a second set of AnTuTu results showed a phone which reports indicated would be coming to Europe. This one, the G900H, is thought to be the lower-end model as it has a 1080p display and curiously packs an eight-core Exynos 5422 chip clocked at 1.5GHz with a Mali T628 GPU and 2GB of RAM.

Confusingly though, KGI Securities analyst Ming-Chi Kuo – who has a good rep for this sort of thing – reports that the “standard” Galaxy S5 will use a Snapdragon 800 chip while the higher-end model will use an Exynos 5430 octa-core.

The Samsung Galaxy S4 used a 13-megpixel back-illuminated sensor (BSI) with LED flash, 1080p video and a number of built-in features such as dual-capture mode with both front and rear-facing cameras.

There are a number of rumours surrounding the Galaxy S5’s camera, including Samsung-made ISOCELL sensors at either 8-megapixels or 16-megapixels, but then there’s also been leaks suggesting either 20-megapixels or 21-megapixels. The most consistent rumour, however, centres on the 16-megapixel idea, although a leaked photo of the handset’s box shows a 20-megapixel setup.

Several photos reportedly from the Galaxy S5 feature EXIF data showing both 16-MP and 20-MP sensors, so it could be that the “standard” and “premium” models rumoured have different sensors. Optical image stabilisation (OIS) is also rumoured, though some sources say it’s not going to appear, while other reports point to a dedicated camera button.

Generally though, we’re pretty confident Samsung will churn out a capable camera setup – the last few phones, including the Galaxy S3, Galaxy S4 and Galaxy Note 3 have all had excellent cameras which have not only produced good image quality but have also been very user friendly.

Discussing the software is in some ways something of a moot point as it seems inevitable given Samsung’s track record that the Galaxy S4 will be upgraded to the same package as the Galaxy S5 at some point in the future.

However, we have seen evidence that the Galaxy S5 will ship with Android 4.4 KitKat pre-installed and it will feature a new version of the company’s TouchWiz interface designed to take advantage of Google’s latest tweaks. Those tweaks primarily focus on visual changes, for example, leaks show the black colouration to the notification and control bars gives way to transparency effects together with white icons rather than grey or coloured ones.