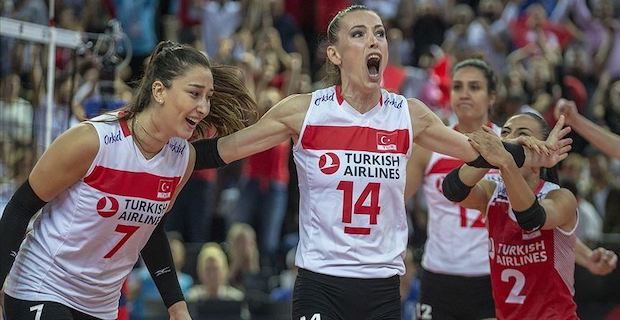 Turkey’s national women volleyball team will take on Belgium for their last group match in the European qualifiers for the 2020 Tokyo Olympics on Friday. Turkey were beaten by Germany 3-1 in their first game of the European qualifiers on Tuesday while they beat Croatia 3-1 in their second game on Wednesday in the tournament. Following second their games, Turkey currently sit in second spot in Pool B as Germany top the group with two wins.

Belgium and Croatia are in third and fourth place, they will play against each other in their second match in Pool B on Thursday.

Turkey's last Pool B game against Belgium will kick off in the Dutch city of Apeldoorn at 1530GMT on Friday.

The Netherlands, Bulgaria, Poland and Azerbaijan in the Pool A are also competing for the 2020 Olympic Games in Tokyo.

The best two nations in each pool will qualify for the semi-finals in the European qualifiers.

The winner-takes-all final is set for Jan. 12.

The winner will secure a place in the 2020 Olympic Games scheduled between July 24 - Aug. 9.

Keywords:
VolleyballTurkey’s National Women Volleyball
Your comment has been forwarded to the administrator for approval.×
Warning! Will constitute a criminal offense, illegal, threatening, offensive, insulting and swearing, derogatory, defamatory, vulgar, pornographic, indecent, personality rights, damaging or similar nature in the nature of all kinds of financial content, legal, criminal and administrative responsibility for the content of the sender member / members are belong.
Related News