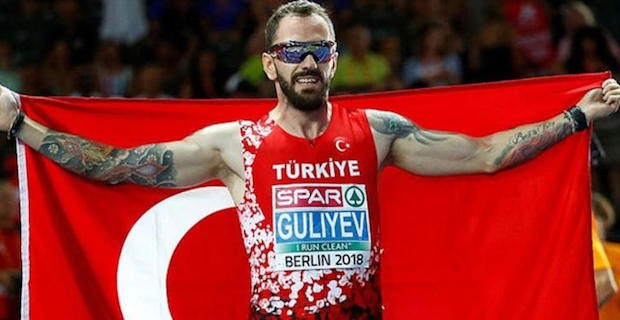 Turkish track and field athlete Ramil Guliyev is among the four finalists nominated for the male athlete of the year award by the European Athletics Association, the governing body for athletics in Europe.

Guliyev won the 200m title at the European Championships in Berlin in August, setting a championship record of 19.76 seconds.

The award will be presented at Golden Tracks award ceremony in Lausanne, Switzerland on Oct. 26.

Keywords:
GuliyevMale Athlete Of YearEuropean Championships Berlin
Your comment has been forwarded to the administrator for approval.×
Warning! Will constitute a criminal offense, illegal, threatening, offensive, insulting and swearing, derogatory, defamatory, vulgar, pornographic, indecent, personality rights, damaging or similar nature in the nature of all kinds of financial content, legal, criminal and administrative responsibility for the content of the sender member / members are belong.
Related News