DOLLAR 18,46
EURO 17,72
GOLD 966,94
BIST 3.265,64
Some mortgage deals have been withdrawn by banks and building societies
1St Qeeg Guided Rtms Tdcs Research Conference held on Oxford University
The British pound slipped to 1.1187 against the US dollar on Friday, its...
London’s Transport Commissioner Andy Byford set to leave TfL
Tax cuts are likely to push UK borrowing and debt to unsustainable levels
Karaca launches limited-edition collaboration with visionary designer...
South Africans are demanding return of Great Star of Africa
Registration for the New Term Art, Language and Music Short Courses has...
Plan ahead if visiting London for the State Funeral of Her Majesty Queen...
How to get to the back of the queue! Queen Elizabeth II lying in state... 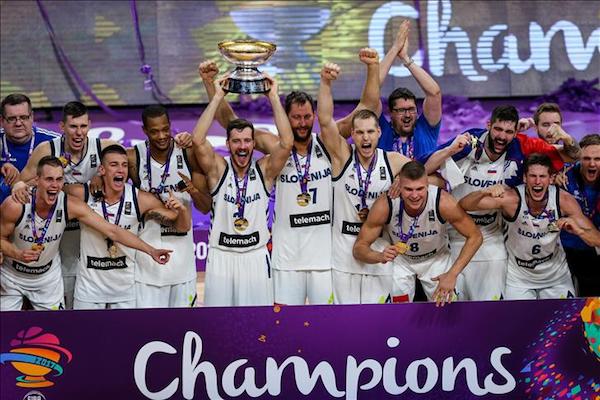 AvrupaLondon - Slovenia won their first ever gold medal in the EuroBasket 2017 and became Europe's champions after defeating Serbia 93-85 in Istanbul on Sunday.The thriller at Sinan Erdem Dome saw undefeated Slovenia taking on Serbia, who only lost once in a group stage.Slovenia, as expected, displayed a great scoring performance in the first half, as they did throughout the campaign, scoring 56 points.Serbia did not give up and fought their way back in the third and fourth quarters, managing to even the score at 82-82 with 3:22 to go in the final.However, Slovenians managed to go on a 10-0 run to claim their first ever title in the tournament history.Slovenia's captain Goran Dragic, who is expected to retire from international basketball after tonight's last game, was essential for his team. He scored a game-high 35 points.Shooting guard Klemen Prepelic accompanied Dragic with 21 points, center Anthony Randolph also chipped in 11 points.For Serbia, point guard Bogdan Bogdanovic scored a team-high 22 points, center Milan Macvan chipped in 18 points but it was not enough to claim the gold medal.After the match, an All-Star 5 was announced to award the five best players of the tournament, who were Spain's Pau Gasol, Serbia's Bogdan Bogdanovic, Russia Alexey Shved and Slovenian teammates Goran Dragic and Luka Doncic.Alexey Shved was the top scorer in the tournament, with 24.3 points per game.Pau Gasol, who started his international tournament career with a bronze medal in EuroBasket 2001, ironically finished his international career with a bronze medal again in Istanbul this year.Goran Dragic was named the Most Valuable Player in the tournament. He helped his team go undefeated with 22.5 points per game and 5.1 assists per game.