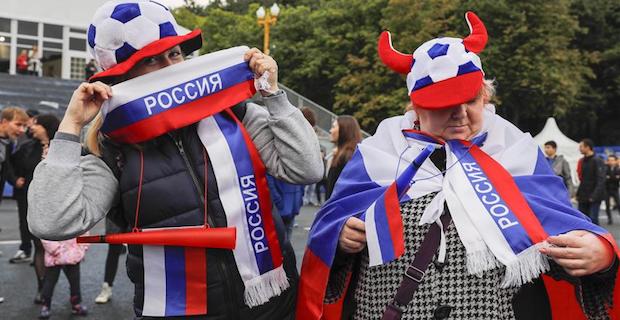 Russian fans believe their home team will advance through the group stage of the 2018 FIFA World Cup for the first time since the end of the Soviet Union in 1991, according to an opinion poll.

The World Cup is due to begin in just three days on Thursday in Russia and will continue until July 15.

Russia has had three unsuccessful showings at the group stages in the World Cup since 1991; however, a poll suggests that nearly 80 percent Russian fans believe their team will advance in the Group A that comprises Saudi Arabia, Egypt and Uruguay.

A total of 31 percent of the respondents also believe Russia will end up in Round 16, but will not advance into the quarter finals stage.

The poll was carried out by the “Public Opinion” -- one of the three major non-governmental polling and sociological research organizations in Russia.

A total of 32 national teams from five confederations will play 64 matches in 12 stadium venues located in 11 cities of Russia; 48 matches are in the group stage and 16 in the knockout stage.

Twelve matches will be played in Moscow at two stadiums - “Luzhniki” and “Otkritie Arena” (Russian for “Discovery Arena”). Russia’s main football venue – “Luzhniki” will host the final of the 2018 FIFA World Cup.

One million tourists are expected to visit Russia during the championship while an estimated global in-home audience of more than 3 billion people are expected to watch the 2018 FIFA World Cup matches over the TV, online or on mobile devices.

Russia has been preparing for the World Cup since Dec. 2, 2010 when the country was awarded the hosting rights.

Since then Russia has built 10 and reconstructed two stadiums in 11 host cities; it also built a new airport and 62 hotels.

Russia is also granting visa-free travel to foreign tourists who have bought tickets for the World Cup matches.

Keywords:
FIFA World CupThe World Cup
Your comment has been forwarded to the administrator for approval.×
Warning! Will constitute a criminal offense, illegal, threatening, offensive, insulting and swearing, derogatory, defamatory, vulgar, pornographic, indecent, personality rights, damaging or similar nature in the nature of all kinds of financial content, legal, criminal and administrative responsibility for the content of the sender member / members are belong.
Related News