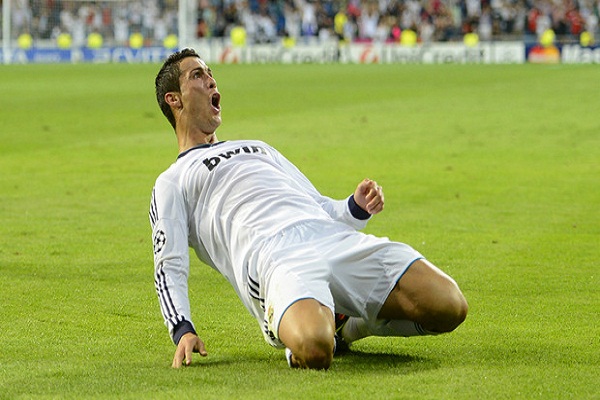 Vatan OZ/Avrupa Times-Champions League: Real Madrid topple Paris 3-1 at home. Two late goals give Spanish side upper hand in first leg match of last 16 tie. Cristiano Ronaldo of Real Madrid celebrates after using penalty kick during the UEFA Champions League Round of 16 football match between Real Madrid and Paris Saint-Germain, at the Santiago Bernabeu stadium in Madrid,Portuguese superstar Cristiano Ronaldo scored twice and also tallied up to 100 Champions League goals for Madrid, Brazilian left back Marcelo added one in the 86th minute.Although Paris Saint-Germain found the first goal in the 33rd minute with Adrian Rabiot, Madrid responded with a penalty goal from Ronaldo in the 45th minute after midfielder Toni Kroos was brought down inside the penalty box. Ronaldo's 83rd-minute goal gave his team a 2-1 lead and Marcelo increased the lead just three minutes later.

The second leg of the tie will be played on March 6 in Paris. In the other match of the evening, Premier League side Liverpool dominated Portugal's Porto with a 5-0 result, Sadio Mane scored a hat-trick for the Merseyside club. Liverpool was up 2-0 after the first half, they did not settle with the result in the second half and scored three more. Sadio Mane scored three goals, Mohammed Salah and Roberto Firmino each added one in the resounding win. The second leg of Liverpool-Porto tie will be played in England on March 6. On Tuesday matches, Juventus could not protect a 2-0 lead at home to eventually draw 2-2 with Tottenham Hotspur, Higuain's early two goals were not enough for last year's finalists. Harry Kane and Christian Eriksen scored for the English side. The second leg will be played in London on March 7. Manchester City was dominant against Basel and took care business in an away match with a 4-0 win. Ilkay Gundogan was in top form as he scored two goals, Sergio Aguero and Bernardo Silva added one in Switzerland. The second leg of the tie will also be played on March 7.