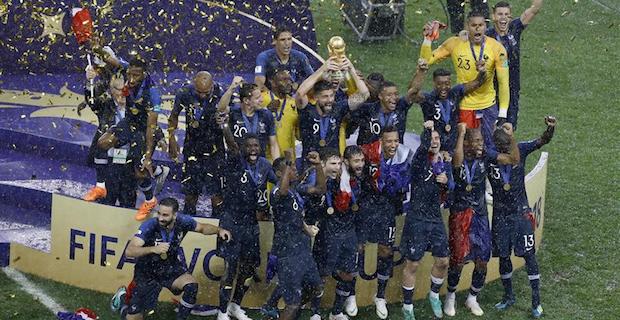 France have won the World Cup title after beating Croatia 4-2 in the final, repeating as champions after the 1998 title.

The World Cup Final in Moscow's Luzhniki Stadium saw Les Bleus taking the lead in the 18th minute, when Mario Mandzukic headed in Antoine Griezmann's free-kick cross into his own net.

Croatia leveled the match at 1-1 in the 28th minute. Ivan Perisic's half-volley just inside the penalty area found the bottom right corner.

In the 38th minute, France were awarded a penalty after referee checked with video assistant referee (VAR). Griezmann made no mistake from the spot to give 2-1 lead to his team.

The second half also saw three goals, France increased the lead to 4-1 within six minutes with Paul Pogba and Kylian Mbappe.

In the 69th minute, Croatia pulled one back as goalkeeper Hugo Lloris' big mistake led to Mandzukic easily scoring the ball.

Lloris tried to dribble around Mandzukic, but the Croatian closed down the goalkeeper, stuck out his leg to tap the ball into the empty goal.

The last World Cup Final with at least three goals was 20 years ago, in 1998 at the Stade de France, when France beat Brazil 3-0 to win their first ever World Cup title.

France's manager Didier Deschamps became the third person to win the World Cup as a player and manager.

He was in the France squad back in 1998. The other two people winning the World Cup as a player and manager were Mario Zagallo and Franz Beckenbauer.

Croatia's Luka Modric won the FIFA Golden Ball award, which is given to the best player of the tournament.

Adidas Golden Glove Award has been given to Belgium's goalkeeper Thibaut Courtois.

FIFA Fair Play Trophy has been given to Spanish football team.

Keywords:
World CupFrance Win World CupFrance
Your comment has been forwarded to the administrator for approval.×
Warning! Will constitute a criminal offense, illegal, threatening, offensive, insulting and swearing, derogatory, defamatory, vulgar, pornographic, indecent, personality rights, damaging or similar nature in the nature of all kinds of financial content, legal, criminal and administrative responsibility for the content of the sender member / members are belong.
Related News