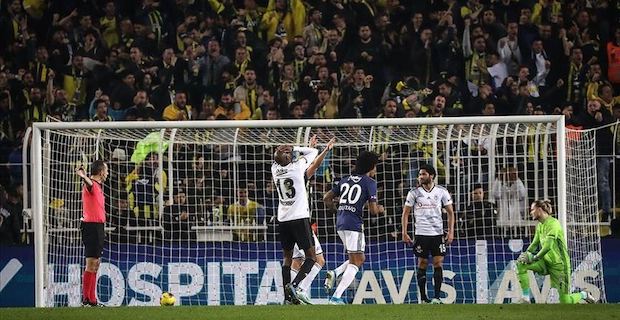 Fenerbahce beat Besiktas 3-1 in an Istanbul derby match on Sunday to cling to the title race in Super Lig led by Sivasspor. At Ulker Stadium in Istanbul, Turkish football powerhouses Fenerbahce and Besiktas met a vital Turkish Super Lig derby in a Week 16 match.

The opening goal came by Fenerbahce's Max Kruse in the 23rd minute with a penalty shot and Ozan Tufan scored the second goal for his team in the 32nd minute while Besiktas' Atiba Hutchinson responded in the last minute of the first half to keep their hope alive in the second half.

Vedat Muriqi scored the third goal for Fenerbahce in the 58th minute to dash Besiktas' hopes for win.

Fenerbahce moved up the third spot with 28 points while Besiktas moved down to the fourth spot with 27 points.

Demir Grup Sivasspor grabbed a point with an extra-time goal to draw 2-2 with Genclerbirligi in Sunday's match to ensure to end 2019 at the top of the table in Turkish Super Lig.

This season, an underdog team tops the division, which is a rare occasion for the Super Lig.

The club from central Anatolia, Demir Grup Sivasspor are now on top of the league with 34 points.

The leader Sivasspor increased the gap with the defending champs to 10 points.

Reigning champs Galatasaray fell away in the title race of the Turkish football league after losing against Goztepe on Saturday. Following this result, Galatasaray remained in the sixth spot with 24 points.

Medipol Basaksehir from Istanbul are currently in the second spot as they have 30 points. Trabzonspor from Black Sea region bagged 26 points in 15 weeks.

Here are the results in the week 16 so far:

Keywords:
FenerbahceBesiktas
Your comment has been forwarded to the administrator for approval.×
Warning! Will constitute a criminal offense, illegal, threatening, offensive, insulting and swearing, derogatory, defamatory, vulgar, pornographic, indecent, personality rights, damaging or similar nature in the nature of all kinds of financial content, legal, criminal and administrative responsibility for the content of the sender member / members are belong.
Related News