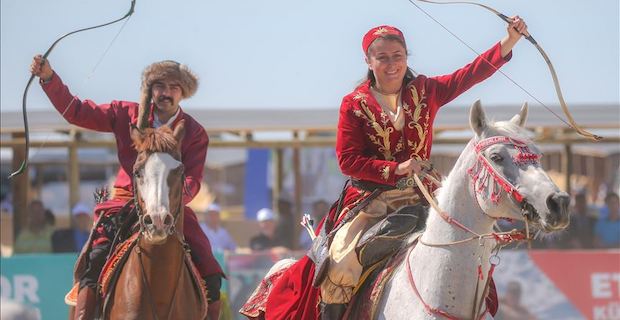 As many as 1.2 million people visited fourth edition of Turkey’s annual Ethnosport Cultural Festival, held in metropolis of Istanbul. The four-day festival wrapped up on Sunday.  Organized by the World Ethnosport Confederation, the festival brought together traditional sports and games like archery, equestrian javelin, oil wrestling, belt wrestling, mounted javelin throws, mancala, and horseback archery.  Nearly 1000 athletes from16 nations participated in the event, with Argentina as guest country.

In addition to traditional sports, visitors were introduced to old way of life and culture with traditional nomadic tents, horse displays, handcraft workshops, and sword and shield displays.

There were 40 traditional games exclusively for children, besides 60 handicraft workshops.

The event also presented a dazzling array of traditional cuisines, from across the globe.

Football stars from Turkey’s top-tier Super Lig also visited the festival, not to use their feet to kick football, but to try their hand at archery.

The visitors appreciated their skills and took photos with the champion dogs.

Wearing steel vests and helmets, participants combined fun and hard work on a track set out by Anadolu Agency and the Turkish Police Academy.

They braved obstacles and fought time to finish the challenging track in stipulated period.

Keywords:
Ethnosport FestivalTraditional SportEthnosport Cultural Festival
Your comment has been forwarded to the administrator for approval.×
Warning! Will constitute a criminal offense, illegal, threatening, offensive, insulting and swearing, derogatory, defamatory, vulgar, pornographic, indecent, personality rights, damaging or similar nature in the nature of all kinds of financial content, legal, criminal and administrative responsibility for the content of the sender member / members are belong.
Related News