156.7-km first stage from Istanbul to Tekirdag kicks off 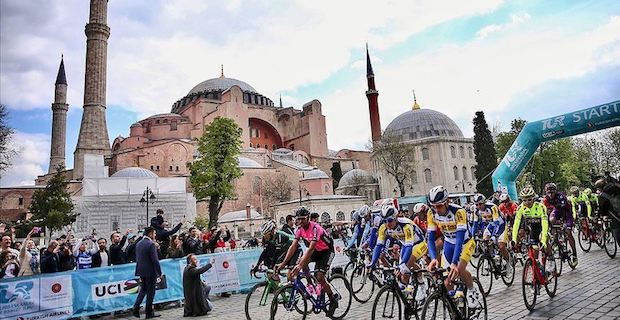 The 55th edition of the Presidential Cycling Tour of Turkey, the world's only cycling tour to connect the continents, kicked off in Istanbul on Tuesday as a part of the “UCI World Tour” calendar for the third time.

In the world's only cycling tour to connect the continents, cyclists will also ride at the final stage in the Eurasia tunnel connecting Asia to Europe beneath the Bosphorus Strait

The first stage started in Istanbul and will end in Tekirdag on a 156.7-km route.

Four World Tour teams are also among 17 teams which will cycle in about 1,000km-long 6-day race.

The race will be broadcast in 185 countries.

Started in 1963 as "Tour of Marmara", this year's tour will follow a similar "Nostalgic" route to its first edition.

As one of Turkey's most prestigious worldwide sporting events, the 55th edition of the Presidential Cycling Tour of Turkey will make a new start this year with its new slot in April on “UCI World Tour” calendar.

In recent years, most of the stages in the tour were used to be organized along the Mediterranean and Aegean coasts. This year, the race moved to different parts of the country in order to promote historical and natural richness of these regions through cycling as the organization has been held in the Marmara region this time.

Teams departing from Istanbul will head to Tekirdag, Eceabat, Canakkale, Edremit, Balikesir, Bursa, Sakarya and will see the ultimate finish again in Istanbul.

Comprising from six new stages, the Tour 2019 will be held along a route that exceeds a thousand of kilometers on which world-class teams and ace riders will be crossing the continents at Canakkale, from Europe to Asia.

Keywords:
Cycling TourCycling Tour Turkey
Your comment has been forwarded to the administrator for approval.×
Warning! Will constitute a criminal offense, illegal, threatening, offensive, insulting and swearing, derogatory, defamatory, vulgar, pornographic, indecent, personality rights, damaging or similar nature in the nature of all kinds of financial content, legal, criminal and administrative responsibility for the content of the sender member / members are belong.
Related News