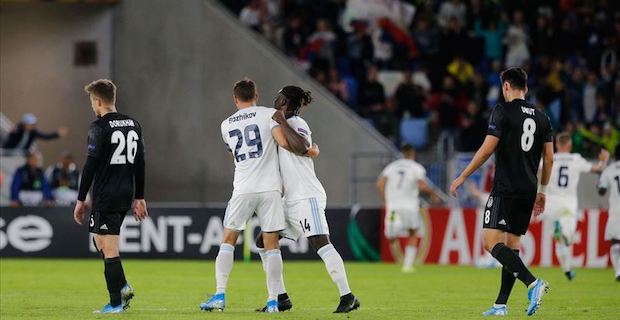 Turkish Super Lig club Besiktas kicked off their UEFA Europa League campaign Thursday with a 4-2 loss against Slovakian club Slovan Bratislava in an away game. In a Group K match at the National Football Stadium, Andraz Sporar gave an early lead to Slovan Bratislava in the 14th minute. But Adem Ljajic equalized in the 29th minute after finding the net with a penalty.

Slovan Bratislava's defender Vasil Bozhikov scored an own goal in stoppage time during the first half, putting Besiktas in front 2-1.

In the second half, Sporar scored his second goal in the 58th minute as Slovan Bratislava equalized.

Both Marin Ljubicic and Mohammed Rharsalla Khadfi found the net for Slovan Bratislava in stoppage time, with the Slovakian club coming back and winning the game 4-2.

Keywords:
BesiktasEuropa LeagueSlovan Bratislava
Your comment has been forwarded to the administrator for approval.×
Warning! Will constitute a criminal offense, illegal, threatening, offensive, insulting and swearing, derogatory, defamatory, vulgar, pornographic, indecent, personality rights, damaging or similar nature in the nature of all kinds of financial content, legal, criminal and administrative responsibility for the content of the sender member / members are belong.
Related News