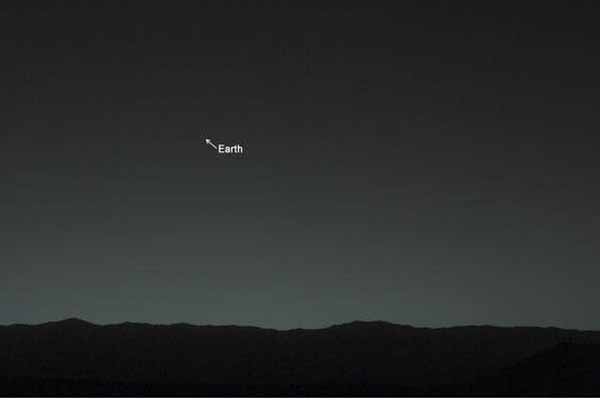 Nasa's Curiosity rover has taken a photograph of Earth from the surface of Mars, showing what our planet looks like from 100 million miles away. It's rare that a single dot on a computer screen can elicit such a strong reaction, but there is something mind-blowing about Earth's diminutive appearance in the image. While we are used to seeing vivid greens and blues and swirling cloud when the Earth is photographed from space, from this distance the planet and its moon appear like no more than a couple of bright 'evening stars'. The picture was posted on the official Twitter account for Curiosity, which Nasa has taken to anthropomorphising, with the rover tweeting on Thursday: "Look Back in Wonder... My 1st picture of Earth from the surface of Mars." Taken about 80 minutes after Mars' sunset on Curiosity's 529th Martian day using its 'left eye camera', the image was 'processed to remove effects of cosmic rays', with Nasa releasing a second image blowing up the smudge to make Earth and the Moon clearly visible.  "A human observer with normal vision, if standing on Mars, could easily see Earth and the moon as two distinct, bright evening stars," a Nasa spokesperson said. Nasa's Mars Science Laboratory Project is using Curiosity to assess ancient habitable environments and major changes in Martian environmental conditions, exploring whether it is possible that the planet once supported life. Since landing in Gale Crater, it has discovered that an area known as Yellowknife Bay was indeed habitable once upon a time, finding "a lake-stream-groundwater system that might have existed for millions of years."