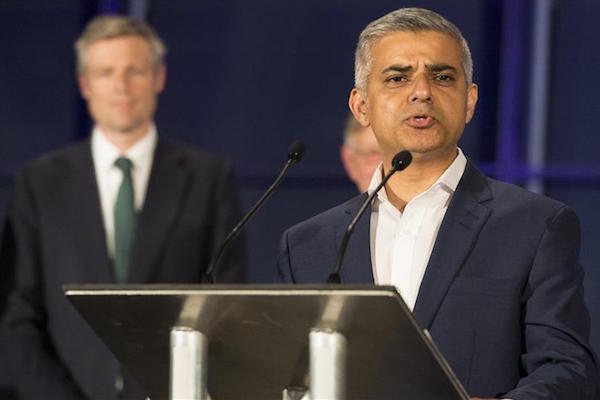 LONDON-“My name is Sadiq Khan, I am the mayor of London.”

The new leader of Western Europe’s largest city kept his words simple and let the symbolism speak for itself as he was sworn in as Britain’s most powerful directly elected politician.

He broke with tradition and chose to be sworn in at Southwark Catherdral, one of London’s oldest places of worship. He opted for a multi-faith ceremony in recognition of the city’s multiculturalism. And he was introduced by Doreen Lawrence, a campaigner whose son Stephen was killed in a racist attack in London more than two decades ago.

His victory was a resounding one not only electorally – he took 57 percent in last Thursday’s contest after the second round of voting – but also in global terms. It even drew congratulations from U.S. presidential hopeful Hillary Clinton.

Khan is now one of Britain’s most senior and powerful politicians: the London mayoralty directly controls a multimillion-pound budget and holds powers in a range of areas from housing to transport.

The fact its occupant is now a Muslim “will serve to renew bonds of cooperation between London’s communities and City Hall”, said Shuja Shafi, the secretary-general of the Muslim Council of Britain, which represents Islamic organizations around the U.K.

“It is most unfortunate that a Londoner who happens to be Muslim, and has gone out of his way to repudiate extremists, has nevertheless been smeared with the extremist brush,” Shafi said, referring to Khan.

He continued: “Such smear-by-association has become all too common for Muslims and Muslim organizations. It is a cancer blighting sections of our political and media class and has infected the solemn business of government.”

Adam Bienkov, an observer of London politics, said the smear campaign was initially played out in local newspapers like the London Evening Standard, before being drawn to Goldsmith himself.

“At first, stories about Khan's links were briefed to supportive newspapers by Goldsmith's campaign under the condition that they were not credited as coming from them directly,” he wrote on the analysis website Politics.co.uk.

He continued: “Yet, as the polls showed the attacks weren't getting through, Goldsmith and other senior Conservatives began to take ownership of them.”

Defense Secretary Michael Fallon, Home Secretary Theresa May and even Prime Minister David Cameron were among the senior Conservative Party politicians questioning Khan’s ability to become London mayor because he had spoken at the same events as so-called extremists.

Yet Khan consistently led in public opinion polls, and even before his victory was officially announced late last Friday night, Conservative politicians were appearing on television to attack their own party’s tactics.

Among them was Andrew Boff, a member of the London Assembly, who called it “a very negative part of the campaign.”

He told London Live: “I received some feedback from our supporters out there in London that they felt as though they were all of a sudden under suspicion. It was a very negative thing to do and it reflected badly on the Conservative Party, because the Conservative Party is not like that.”

Whether there will be further recriminations within the Conservative Party remains to be seen. For the moment, Cameron and Khan have discussing campaigning together in London as they seek a vote to remain in the European Union in next month’s referendum.

It is not just the Conservatives but Sadiq Khan’s own Labour Party that has much to consider from him becoming the new Mayor of London.

Khan’s victory in London disguised a difficult set of election results elsewhere in the country for Labour: the party fell into third place in Scotland and lost seats in the Welsh Assembly and in English municipalities. He is now one of the most senior figures in Britain’s main opposition party – an influential alternative, possibly even a rival, to Labour’s left-wing leader Jeremy Corbyn.

Many Labour lawmakers believe the distinctly left-wing tone adopted by Corbyn since he became leader last September has isolated the party from the British electorate, and that Sadiq Khan’s campaign was only successful because Corbyn was barely involved in it.

Indeed, the Labour leader’s only regular appearance in the London mayoral election was in Conservative posters claiming Khan was just another left-wing Corbynite.

There is nothing to suggest Khan will personally challenge for the Labour leadership. The leaders of Britain’s major political parties must be lawmakers in the House of Commons and Khan resigned his own parliamentary seat only on Tuesday in order to solely concentrate on being mayor.

But as the politician who has collected 1.3 million votes – the most won by any single person in British history – his endorsement will surely be pivotal.