What if Jerusalem falls, Global Perspective 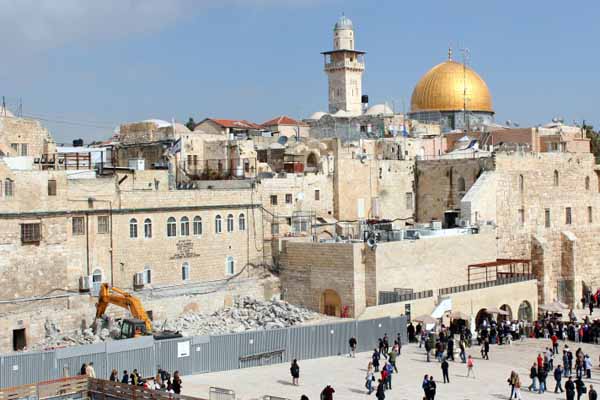 Jerusalem is a holy city for the Muslims, Christians and Jews… The first Qibla of the Muslims. The city where Prophet Muhammad (peace be upon Him) ascended for his journey to heavens. In the words of Poet Sezai Karakoç “The city built in the sky and lowered on the Earth”.

So much so that just opposite to current perception, Jerusalem alongwith Mecca and Madina had been one of the places from where the atmosphere of peace had been permeated into the Middle East and from the Middle East to the whole World during the centuries long peaceful eras. Whereas today with the bloodsheds perpetrated by Israel and other developments, to some the Middle East has been mentioned as a “swamp”.

The Jerusalen Decision of the United States of America and its repercussions...

The whole World united against the unilateral US decision to recognize Jerusalem as the capital of Israel which is a kind of an extension of the ongoing controversies in the US internal politics. All of the countries displayed an honoured stance against this decision despite the obscene, vulgar and disrespectful threats in the United Nations. The United States of America was all alone at the UN Security Council with a vote of 14-1. Besides the United States only 8 countries bowed before the blackmail at the UN General Assembley. The Muslim World, the EU countries, African, Latin American and the Far Eastern countries moved in a seldom seen united manner.

The people in almost all of the countries including the United States of America and Israel protested this decision. The mankind virtually got united around commonsense.

It is imperative here to mention Turkey’s leading role as the term president of the Islamic Cooperation Organization. President Recep Tayyip Erdoğan’s consultations with the EU Leaders, Putin, the Pope and other leaders were extremely important from the standpoint of a joint stance.

We hope that the US decision would contribute to the development of a Global awareness regarding the Palestine issue. The Global consensus built against this decision would be an opportunity to draw attention towards ethnic cleansing spread over the time and for the domination of an approach based on justice in the region.

What if the World wouldn’t have resisted? Or what if Jerusalem falls…

The US decision is one of the most beautiful examples of a good that could emerge from an evil.

If it was not resisted, Israel could have been excessivlely encouraged for its Promised Land ideal to grab territories of the regional countries extending to Rivers Tigris and Euphrates as late Prime Minister Erbakan had consistently warned. Today when the region with its current situation and the danger created for the mankind is thought, the danger to be created by “The Greater Israel” will be seen more clearly.

The Jews who are not racists and fascists are probably aware of the danger that could be created by the Zionist Jews who are running behind their Promised Land ideal and perceive themselves as the chosen race. It is still fresh in the memories how a grave catastrophe Hitler’s “superrace” Nazism ideaology for the Germans had been. If the United States’ Jerusalem decision was not resisted a similar “superrace” idealogy would have been encouraged even more.

As a result of the collective reaction of the EU and Muslim World against the Jerusalem decision it has been once again observed that gradually straining Islam and the West relations do not necessarily have to be established over hostility.

Provided the US decision was not resisted, the World apprehension of “might is right” was going to be strengthened rather than prevalence of the power of the rightful. The morale of resistance of the oppressed geographies was going to receive a deep wound.

If a Global effort was not made on the Jerusalem issue, inbred desperation was going to be consolidated even more and the future hopes of the desperate were going to be largely faded.

If the mankind had remained mere a spectator over the decision, how could it look into the eyes of the honorable daughter of Palestine Aheed who displayed a heroic resistance against Israeli soldiers?

While the Palestinians are resisting to deter burning of their homes in Gaza, how could anyone dare commemorating 24 year old American peace activist Rachel Corrie who was crushed by Israeli bulldozers?

Nazism should not return, Jewish Nazism must be stopped…

Well, is it sufficient to stop here?

Of course not. Because if Jerusalem falls, all of the above mentioned things would be turned upside down.

The liberal Jews must resist the most, to deter fall of Jerusalem. Otherwise they will be the first people to lose. Just as the liberal Germans had to lose first in the German Nazism. The German Nazism made the mankind pay a very heavy price. It should not live the same things with the Jewish Nazism again.

We presented an assessment of Prof. Dr. Kudret BÜLBÜL, Dean Faculty of Political Sciences at Ankara Yıldırım Beyazıt University regarding the matter...