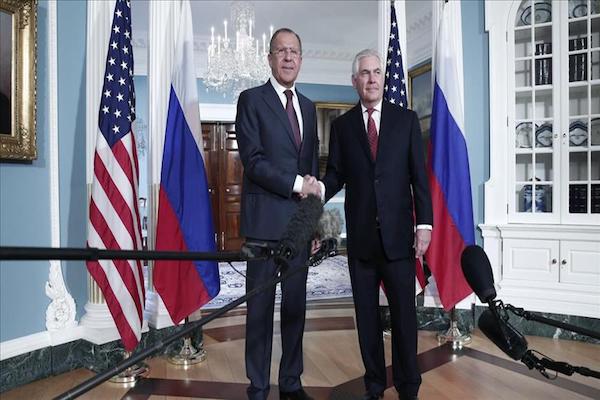 AvrupaLondon - U.S. Secretary of State Rex Tillerson and his Russian counterpart Sergey Lavrov met on Sunday on the sidelines of the United Nations General Assembly and discussed civil war-torn Syria.State Department spokeswoman Heather Nauert said in a statement that Tillerson and Lavrov “recommitted to deconflicting military operations in Syria, reducing the violence and creating the conditions for the Geneva process to move forward (…)”.Syria has been locked in a vicious civil war since early 2011, when the Bashar al-Assad regime cracked down on pro-democracy protests. Since then, more than 250,000 people have been killed and in excess of 10 million displaced, according to the UN.Earlier this week, Turkish and Russian diplomatic officials said that the parties at the Syrian peace talks in Kazakhstan agreed on the boundaries of the final de-escalation zone in northern Idlib province.U.S. President Donald Trump is expected to meet Turkey's President Recep Tayyip Erdogan on the sidelines of the United National General Assembly on Thursday.