US conveys willingness to help Turkey on Khashoggi case 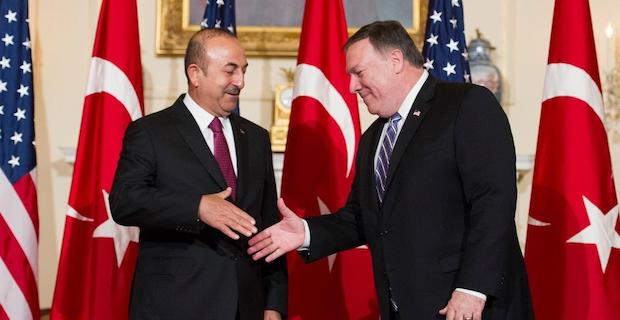 The U.S. on Wednesday reiterated willingness to assist Turkey in its investigation of the missing Saudi journalist.

Syria, Iran, and counterterrorism were among the issues addressed.

"The Secretary welcomed the decision to return Pastor Andrew Brunson and reiterated the United States’ willingness to assist Turkey in its investigation of the Jamal Khashoggi case," the statement said.

Prior to his visit to Ankara, Pompeo went to Saudi Arabia, where he held talks with Saudi King Salman bin Abdulaziz al-Saud and Crown Prince Mohammed bin Salman over the disappearance of Khashoggi.

Khashoggi, a columnist for the Washington Post newspaper, has long been feared killed at the Saudi consulate in Istanbul after he entered on Oct. 2 and was never seen exiting.

On Monday, Turkish and Saudi officials searched the Saudi Consulate in Istanbul after the start of a joint probe into the missing journalist.

Saudi authorities have yet to give a clear explanation of what happened to Khashoggi, while several countries -- particularly Turkey, the U.S., and the U.K. -- are pressing for the mystery to be cleared up as soon as possible.

Pompeo and Cavusoglu also addressed the detention of Dr. Serkan Golge and other U.S. citizens as well as locally employed staff of the U.S. mission in Turkey.