UK opposition to submit motion of no confidence in PM

Move to push back vote to after Jan. 15 triggers Labour Party to submit motion of no confidence in Theresa May's government 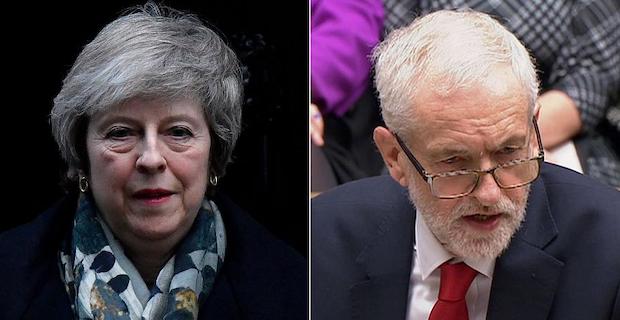 British Prime Minister Theresa May faced a political firestorm on Monday after announcing that a vote on the Brexit agreement has now been pushed back to the second half of next month.

Opposition Labour Party leader Jeremy Corbyn threatened to submit a motion of no confidence in the prime minister to ensure a vote takes place this week, only four days before parliament’s holiday recess.

“It’s very clear that it’s bad, unacceptable that we should be waiting almost a month before we have a meaningful vote on the crucial issue facing the future of this country,” Corbyn said.

“The prime minister has obdurately refused to ensure a vote took place on the date she agreed, she refuses to allow a vote to take place this week and is now, I assume, thinking the vote will be on Jan. 14 -- almost a month away,” he said.

“This is unacceptable in any way whatsoever.”

Corbyn’s reaction followed May’s announcement that the withdrawal agreement reached with the EU will see a “meaningful vote” in the week commencing Jan. 14.

Corbyn continued: “So, as the only way I can think of ensuring a vote takes place this week, I’m about to table a motion which says the following:

‘That this House has no confidence in the prime minister due to her failure to allow the House of Commons to have a meaningful vote straight away on the withdrawal agreement and framework for future relationships between the UK and European Union.’

“That will be tabled immediately, Mr. Speaker.”

Labour later said in a statement that “with the risk of a no confidence vote in her leadership, we have forced the PM to bring her botched Brexit deal back to Parliament.”

It added: “She wanted to waste time to create a false choice between her bad deal and no deal.

The Scottish National Party leader in Westminster, Ian Blackford, also got a green light for an emergency debate on May’s handling the Brexit issue with European leaders last week at an EU summit.

Parliament Speaker John Bercow said he will announce the time of the debate later.

British voters decided to leave the EU in a 2016 referendum after the country’s more than four-decade membership.

Keywords:
Theresa MayUK OppositionLabour Party
Your comment has been forwarded to the administrator for approval.×
Warning! Will constitute a criminal offense, illegal, threatening, offensive, insulting and swearing, derogatory, defamatory, vulgar, pornographic, indecent, personality rights, damaging or similar nature in the nature of all kinds of financial content, legal, criminal and administrative responsibility for the content of the sender member / members are belong.
Related News