Turkey, Iran, Russia are going to discuss Syria in Ankara 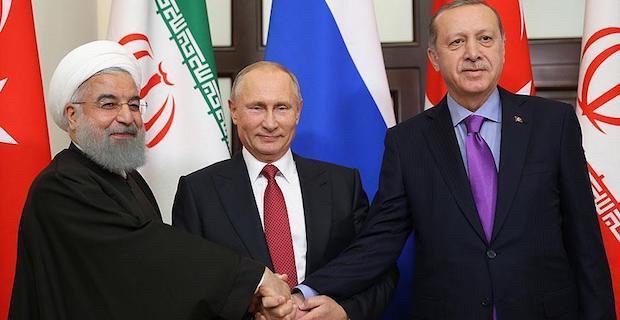 AVRUPA LONDON - A trilateral summit bringing together Turkey, Russia and Iran is expected to focus on latest developments in war-torn Syria, according to diplomatic sources.Turkish President Recep Tayyip Erdogan will host the meeting in capital Ankara on Wednesday. Russian President Vladimir Putin and Iranian President Hassan Rouhani will attend the talks which will focus on the extension of the cease-fire in Syria, securing territorial integrity and preventing violations.Senior officials of the three countries will gather on Tuesday to work on a joint declaration which will be released after the summit.The declaration will demand an extension to a 30-day UN cease-fire resolution adopted late in February, said the sources, who requested anonymity due to restrictions on speaking to the media.Top diplomats Mevlut Cavusoglu, Sergey Lavrov and Javad Zarif from Turkey, Russia and Iran, respectively, will discuss solutions to the conflict.The leaders will also hold bilateral talks.Turkey, Russia and Iran are the guarantor countries of de-escalation zones in Syria.

Keywords:
Russia Iran TurkeyRelationship Russia Turkey IranSyria
Your comment has been forwarded to the administrator for approval.×
Warning! Will constitute a criminal offense, illegal, threatening, offensive, insulting and swearing, derogatory, defamatory, vulgar, pornographic, indecent, personality rights, damaging or similar nature in the nature of all kinds of financial content, legal, criminal and administrative responsibility for the content of the sender member / members are belong.
Related News