Just over 1 weeks left until 3 May elections, with more than 4,300 council seats being contested. It is great to see that the community is increasingly active across London and beyond: Conservative council candidates Salih Gaygusuz in St Albans North 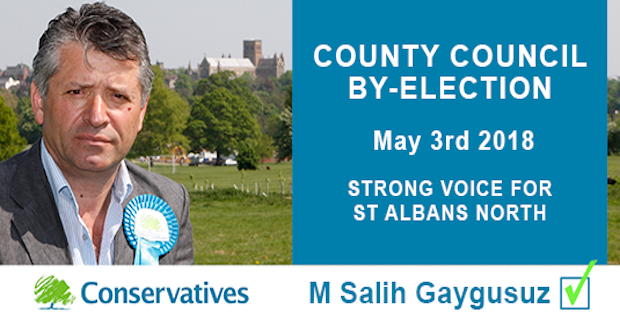 AVRUPA TIMES/ST ALBANS- Just over 1 weeks left until 3 May elections, with more than 4,300 council seats being contested. It is great to see that the community is increasingly active across London and beyond: Please support Conservative council candidate M.Salih Gaygusuz in St Albans North. Here is the Conservative council candidate M.Salih Gaygusuz statement for St Albans North:

In 2015 I was honoured to be chosen by my peers in the Conservative run District Council to represent all citizens of this Great and Ancient city as Mayor. This role was, and is always, undertaken with no political leanings and I believe I carried it out with style and dignity.

For those of you who do not know me, al little background and some personal details. I was born in a small village in North East Turkey and I came to St Albans in 1972. Initially I worked in various restaurants and I founded my first restaurant in 1978. At this time I met and married, at the Baptist Church in Sherwood Avenue, my wife of now forty years, Maureen, a local St Albans girl. We have two children, a boy and a girl and we have a grandson Jack. Together we built our business with more restaurants and bars, and some retail units.

I was able to indulge my interest in photo journalism, and I went to war torn Bosnia. The discovery of the distress of innocent people led me to take aid materials there which were distributed to suffering children, some of whom were orphans. I raised lots of money locally to relieve their plight.

There will always be proposed future projects and developments which will require a strong voice to either defend or promote them and I hope you will agree that a strong, campaigning councillor is the best choice for St Albans North.

A Litter free city and environs

Protection of pavements and verges

I will, of course, listen to your concerns and discuss these with you when I am out calling on you in the next four weeks.

I ask you, please give me your vote on Thursday May 3rd for me to represent you at County Council.