Thirteen senior military officers accused of involvement in Turkey’s failed coup were remanded to custody by a court in Istanbul on Monday. 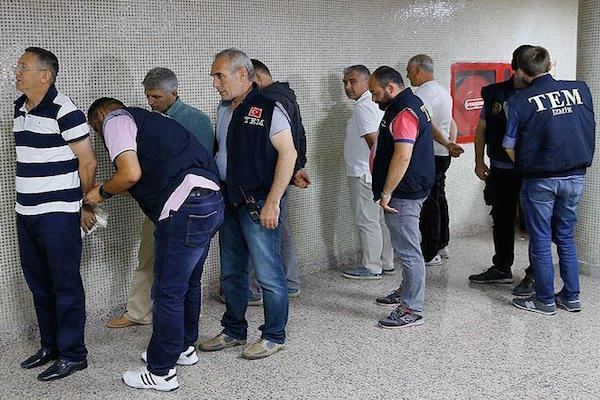 Thirteen senior military officers accused of involvement in Turkey’s failed coup were remanded to custody by a court in Istanbul on Monday. Lt. Gen. Erdal Ozturk, commander of the 3rd Army; Maj. Gen. Fethi Alpay, head of the air force academy; Maj. Gen. Mehmet Ozlu, 3rd air base commander in Konya, were among those detained.

They were detained by the 10th Court of Peace on charges of establishing and being members of an armed terrorist organization and attempting a coup.

Separately, 99 alleged plotters were remanded in Ankara, including Brig. Hakan Evrim, the commander of the Akinci air base northwest of Ankara that is said to have acted as the coup headquarters. They were charged with establishing an armed terrorist organization, attempt to abolish the constitutional order and “intentional killing”.

More than 6,000 suspects have been arrested in connection with Friday’s coup attempt, including military figures, judges and police officers. They are accused of links to U.S.-based Fetullah Gulen, who is said to have pursued a long-running campaign against the government through supporters within the Turkish state.