'This revised order will bolster the security of the United States and her allies,' says Secretary of State Rex Tillerson 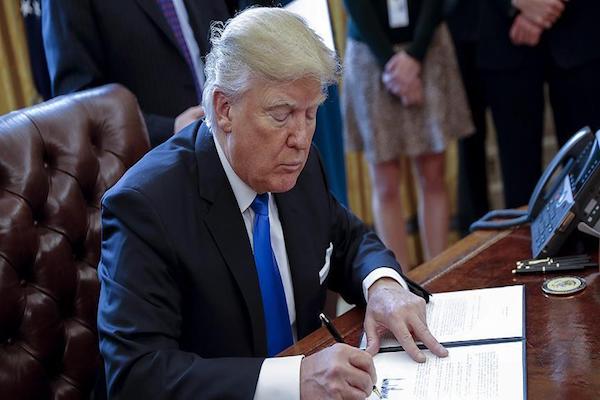 Originally one of the blacklisted countries, Iraq was dropped from the new order that still includes Iran, Libya, Somalia, Sudan, Syria, and Yemen.

Nationals of those countries will not be able to receive new visas for a 90-day period.

The order says "the risk of erroneously permitting entry of a national of one of these countries who intends to commit terrorist acts or otherwise harm the national security of the United States is unacceptably high".

Trump faced intense pressure from the State Department and Pentagon to drop Iraq from the list as Baghdad is a principal partner in the U.S.-led coalition's war on Daesh.

The order was signed by Trump behind closed doors.

Speaking to reporters at a joint press conference alongside his Justice Department and Department of Homeland Security counterparts to announce the order, Secretary of State Rex Tillerson said Iraq and the U.S. had agreed to implement new security measures "to achieve our shared objective of preventing those with criminal or terroristic intent from reaching the United States".

"This revised order will bolster the security of the United States and her allies", he added.

Unlike the previous version, the order signed into effect Monday does not affect any lawful permanent resident of the United States, including green card holders, nor does it bar dual nationals traveling on a passport from a non-affected country.

Attorney General Jeff Sessions maintained that the new order "provides a needed pause, so we can carefully review how we scrutinize people coming here from these countries of concern."

"The majority of people convicted in our courts for terrorism-related offenses since 9/11 came here from abroad," he said.

But Sessions omitted to mention that law enforcement agencies are progressively more concerned with the risk posed by homegrown lone-wolf militants who are radicalized by extremist groups over the internet.

And six months before that, husband and wife Rizwan Farook and Tashfeen Malik carried out a massacre at a Christmas party outside of Los Angeles.

Like Mateen, Farook was a native-born U.S. citizen, and his wife entered the U.S. from Pakistan on a marriage visa.

Pakistan is not one of the countries designated in Trump's order.

In addition to suspending migration, Trump's new order caps the number of refugees that will be allowed to enter the U.S. at 50,000 until the president "determines that additional entries would be in the national interest."

The new bar is less than half the number seen under former President Barack Obama. And an indefinite ban on Syrian refugees contained in the original order has been excluded from the new one.

Trump's revised effort comes after a prior attempt to ban citizens of seven Muslim-majority countries from entering the U.S. was met with subsequent defeats in U.S. courts. That order was widely criticized for being a "Muslim ban".

While it is unclear if the new order will face the same level of widespread opposition, it is likely.

"Donald Trump has doubled down on his harmful and un-American threat to ban Muslims from this country," National Iranian American Council Policy Director Jamal Abdi said in a statement shortly after the order was signed.

“Make no mistake: The new Muslim Ban is still an unconstitutional ban that targets individuals based on their religion and nationality. And it is still a ban that undermines rather than enhances America’s security," he added.