'Politics should be left out of mosques, barracks and courthouses'

The July 15 coup attempt has opened up a new door of compromise in Turkey’s political scene, which if utilized could make the country better, the main opposition Republican People’s Party (CHP) leader, Kemal Kilicdaroglu, said Sunday. 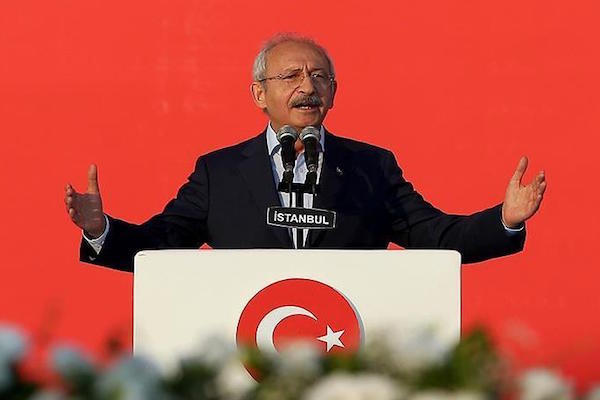 The July 15 coup attempt has opened up a new door of compromise in Turkey’s political scene, which if utilized could make the country better, the main opposition Republican People’s Party (CHP) leader, Kemal Kilicdaroglu, said Sunday.

In his address to millions of people gathered at the "Democracy and Martyrs’ Rally" in Istanbul’s Yenikapi Square, Kilicdaroglu said: "The July 15 coup attempt has opened up a new door of compromise. Post July 15, now there is a new Turkey. If we can carry this power and the culture of reconciliation even further, we will leave a better Turkey for our children."

He went on to say that this was the bloodiest coup attempt in Turkey's history.

"We have 240 martyrs. They took their places in the gold pages of our history of democracy. They are the heroes of democracy.

"All political parties, including me should learn lessons from this calamity [coup attempt]," he added.

The opposition leader listed 12 lessons to be learnt from the coup attempt.

“Politics should be left out of mosques, barracks [and] courthouses,” was the first lesson, according to him.

Other lessons he mentioned included allowing criticism in politics; supremacy of merit in government jobs; protecting democracy under every condition; eliminating all tutorship in democracy; strengthening of the parliamentary system; giving importance to freedom of media; promoting impartiality and independence of the judiciary; and giving importance to secularism and education system.

In a reference to the Sledgehammer (Balyoz in Turkish or Ergenekon) trials, he also called for returning the rights of yesterday's victims. The trials had allegedly been cooked up by a junta within the Turkish Armed Forces in 2003 to overthrow the elected government, only a year after the current ruling Justice and Development Party came to power.

"We should struggle together in this land in peace by strengthening our democracy and respecting each other's differences," he said.

The Yenikapi event marks the end of weeks of “democracy watch” rallies held all across the country since the defeated coup.

Leaders of Turkey’s three main political parties, including the Justice and Development (AK) Party, CHP and Nationalist Movement Party (MHP) are present at the rally together, which is a historic first in the country.

Turkey's government has repeatedly said the coup was organized by followers of Fetullah Gulen, who has lived in self-imposed exile in the U.S. state of Pennsylvania since 1999, and the Fetullah Terrorist Organization