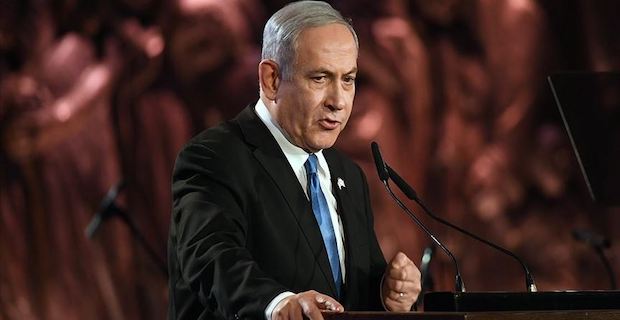 Israeli Prime Minister Benjamin Netanyahu said Wednesday that the U.S. peace plan foresees the proposed Palestinian capital being located in Abu Dis, a neighborhood on the outskirts of Jerusalem, which the U.S. recognizes as Israel’s undivided capital.

According to Makan 33, an Israeli television channel, Netanyahu answered reporters’ questions about the so-called peace plan after a joint press conference with U.S. President Donald Trump in the capital, Washington, D.C.

"The capital of the Palestinian State will be Abu Dis, in East Jerusalem,” he said.

"Israel will dominate all Jewish settlements in the West Bank.”

Netanyahu said the U.S. has set certain conditions on Palestinians for the start of negotiations, including recognizing the Jewish state, recognizing Israel's sovereignty over Jerusalem and giving up the absolute right to return.

He said the U.S. has demanded that Palestine disarm Gaza, drop payments to Palestinian detainees and martyrs’ families, calling them terrorists, stop filing complaints at the International Criminal Court and not become a member of an international organization without Israel's approval

Netanyahu stressed that without fulfilling these conditions, there will be no change in Area C of the West Bank.

“At the same time, Israel will apply its laws to the Jordan Valley, to all Jewish communities in Judea and Samaria and to other areas that the plan designates as part of Israel and which the United States has agreed to recognize as part of Israel,” he said.

Netanyahu noted that they promised not to build a new settlement or expand construction activity in Area C for four years.

Under the 1995 Oslo Accords between Israel and the Palestinian Authority, the West Bank, including East Jerusalem, was divided into three portions – Area A, B and C.

Israel prevents Palestinians from conducting construction projects in parts of the West Bank designated as Area C under the agreement, which falls under administrative and security control of Israel.

Area C is currently home to 300,000 Palestinians, the vast majority of whom are Bedouins and herding communities who predominantly live in tents, caravans and caves.

International law views the West Bank and East Jerusalem as "occupied territories" and considers all Jewish settlement-building activity there illegal.

Keywords:
Benjamin NetanyahuPalestinian CapitalAbu Dis
Your comment has been forwarded to the administrator for approval.×
Warning! Will constitute a criminal offense, illegal, threatening, offensive, insulting and swearing, derogatory, defamatory, vulgar, pornographic, indecent, personality rights, damaging or similar nature in the nature of all kinds of financial content, legal, criminal and administrative responsibility for the content of the sender member / members are belong.
Related News