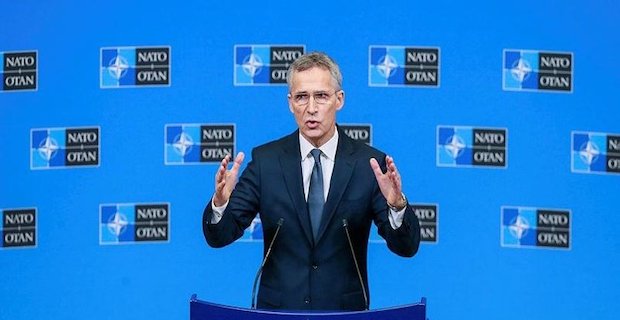 NATO has reiterated its call on Russia to release Ukrainian sailors and the ships they seized, the bloc's Secretary-General Jens Stoltenberg said on Tuesday.

"Today and tomorrow NATO's foreign ministers will meet and address wide range of issues of importance for our shared security. We will address Russia's destabilizing behavior," Stoltenberg told reporters ahead of a two-day NATO foreign ministers' meeting in Brussels.

On Nov. 25, Russia seized two Ukrainian navy ships and a navy tugboat along with 23 crew members off Crimea, accusing Kiev of entering its waters and provoking a conflict.

Stoltenberg said despite Ukraine not being a member of the NATO, the alliance strongly supports the country's sovereignty and territorial integrity.

"NATO allies will also continue to help to modernize and strengthen the Ukrainian armed forces," he added.

"It is urgent that Russia ensures full compliance in a transparent and verified way because the INF treaty is so important for our security," he added.

The treaty was signed in 1987 between the U.S. and the then Soviet Union. On Oct. 21, U.S. President Donald Trump announced his intention to withdraw from the treaty.

Keywords:
Ukrainian SailorsNATOJens Stoltenberg
Your comment has been forwarded to the administrator for approval.×
Warning! Will constitute a criminal offense, illegal, threatening, offensive, insulting and swearing, derogatory, defamatory, vulgar, pornographic, indecent, personality rights, damaging or similar nature in the nature of all kinds of financial content, legal, criminal and administrative responsibility for the content of the sender member / members are belong.
Related News