As Turkey fights terror groups in N.Syria, its NATO allies should stand with it, says Turkey's parliament speaker in Serbia 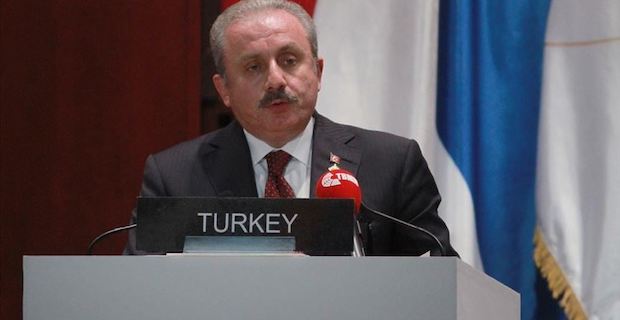 It is strange for Ankara to see its allies in the NATO bloc supporting a terrorist group that Turkey is fighting on the ground, said a senior Turkish official on Monday.

His remarks came in Belgrade, Serbia’s capital, during his visit to attend the 141st Assembly of Inter-parliamentary Union between Oct. 13-17.

Sentop said that he does not find countries’ criticisms of Turkey's anti-terrorist operation in northern Syria -- launched last week -- "rational, legal, or sincere."

"We ask our NATO allies: Is your ally Turkey or is the PKK terrorist organization?" said Sentop.

On Turkey’s current anti-terrorism push in northern Syria, Sentop said Operation Peace Spring’s sole aim is to stem the threat of terrorism from the region.

Ankara wants to clear northern Syria east of the Euphrates River of the terrorist PKK and its Syrian offshoot, the PYD/YPG.

In its more than 30-year terror campaign against Turkey, the PKK -- listed as a terrorist organization by Turkey, the U.S., and the European Union -- has been responsible for deaths of 40,000 people, including women, children, and infants.

Keywords:
NATOMustafa SentopTurkish Parliament Speaker Mustafa Sentop
Your comment has been forwarded to the administrator for approval.×
Warning! Will constitute a criminal offense, illegal, threatening, offensive, insulting and swearing, derogatory, defamatory, vulgar, pornographic, indecent, personality rights, damaging or similar nature in the nature of all kinds of financial content, legal, criminal and administrative responsibility for the content of the sender member / members are belong.
Related News