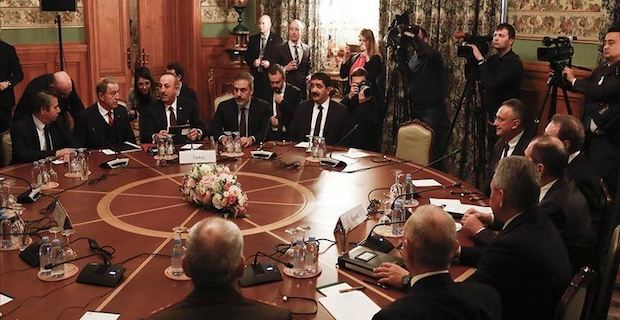 Moscow is hosting a series of negotiations on Monday to find a solution the Libya crisis. The top diplomats and defense chiefs of Russia and Turkey gathered in the Russian capital to assist the talks between Fayez al-Sarraj, the head of Libya’s UN-recognized government in Tripoli, and Khalifa Haftar, eastern Libya-based military commander.

The meeting has started with the talks of Russian and Turkish sides, Maria Zakharova, the spokeswoman for the Russian Foreign Ministry, told reporters.

The hosting Foreign Minister Sergey Lavrov and Defense Minister Sergey Shoygu will address the conflicts in Libya and Syria with their Turkish counterparts Mevlut Cavusoglu and Hulusi Akar, she said.

She also confirmed that al-Sarraj and Haftar arrived in Moscow, whom Russian and Turkish officials meet with.

"In the context of the implementation of the initiative of the presidents of Russia and Turkey, which was announced at the end of the summit in Istanbul [last week], today in Moscow will be held inter-Libyan contacts under the auspices of the foreign and defense ministers of Russia and Turkey. Sarraj, Haftar and representatives of other Libyan parties are expected to participate in these contacts," she said.

On Jan. 12, the warring sides of the Libyan conflict announced a cease-fire in response to the call of Russian and Turkish presidents.

Since the ouster of late ruler Muammar Gaddafi in 2011, two seats of power have emerged in Libya: one in eastern Libya supported mainly by Egypt and the United Arab Emirates and the other in Tripoli, which enjoys the UN and international recognition.

Keywords:
Meeting For LibyaMoscow
Your comment has been forwarded to the administrator for approval.×
Warning! Will constitute a criminal offense, illegal, threatening, offensive, insulting and swearing, derogatory, defamatory, vulgar, pornographic, indecent, personality rights, damaging or similar nature in the nature of all kinds of financial content, legal, criminal and administrative responsibility for the content of the sender member / members are belong.
Related News