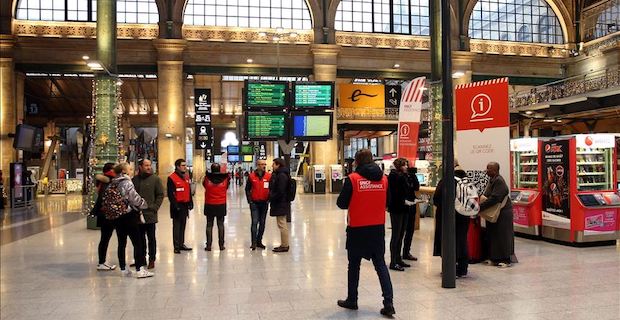 The strike could last for days and the outcome of it is still uncertain but it aims to halt the reform.

The walkout came after the government announced its determination to implement pension reform despite nationwide outcry.

According to France’s National Institute of Statistics and Economic Studies, Macron has further fueled the "sense of anger and rebellion" among French people against their president, with his economic policies that have given the wealthy a greater share of national income since his inauguration on May 17, 2017.

Macron has been facing the biggest crisis since the beginning of yellow vest protests in October last year.

The reform would lift the privileges granted to civil servants and gradually increase the retirement age from 62 to 64. It is expected to adversely affect many sectors.

People who want to get retired at the age of 62 will receive reduced pensions under the new reform.

Demonstrations and strikes have been supported by numerous labor and police unions, as well as yellow vests.

Macron paused his overseas visits for a while to focus on the solution of problems caused by strikes and demonstrations.

Keywords:
Emmanuel MacronFrancePension Reform
Your comment has been forwarded to the administrator for approval.×
Warning! Will constitute a criminal offense, illegal, threatening, offensive, insulting and swearing, derogatory, defamatory, vulgar, pornographic, indecent, personality rights, damaging or similar nature in the nature of all kinds of financial content, legal, criminal and administrative responsibility for the content of the sender member / members are belong.
Related News