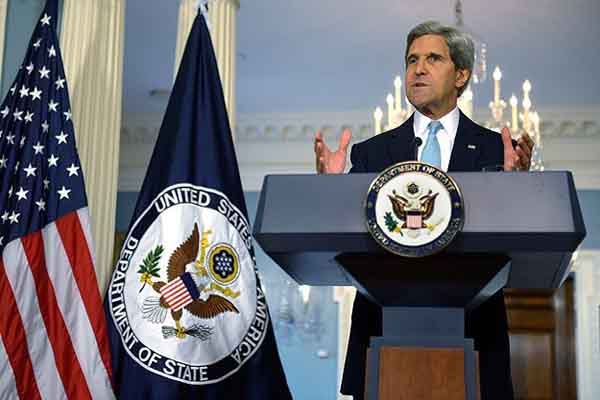 US Secretary of State John Kerry has said that he hopes the chemical weapons in Syria will be rapidly collected into one location and removed from the region. “The fact is that these weapons can be removed whether Assad is there or not there because we know the locations, the locations have been declared, the locations are being secured. And my hope is that much of this material will be moved as rapidly as possibly into one location, and hopefully on a ship, and removed from the region” Kerry said during an interview with National Public Radio. Stating that the crisis in Syria should be resolve in a diplomatic way, Kerry said “There is no military solution. Absolutely not. There is only a continued rate of destruction and a creation of a humanitarian catastrophe for everybody in the region if the fighting continues.” Secretary Kerry, next week in London, will attend the London 11 ministerial meeting with key international partners and Syrian Coalition leadership to review progress towards convening the Geneva Conference on Syria.