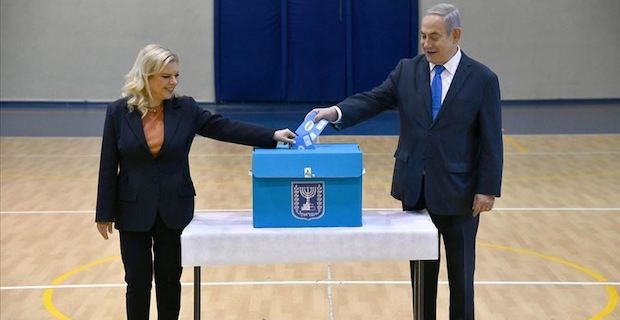 With 90% of the votes counted, preliminary results showed Israeli Prime Minister Benjamin Netanyahu's right-wing Likud Party in the lead after Monday's general election.  The results, however, indicate a crisis could happen in forming the government with no political bloc securing the required majority.

The right-wing camp appeared to be securing 59 seats, but still needs two more seats to meet the minimum requirement to form the government. According to initial results reported by Haaretz newspaper, the Likud Party secured 36 seats while Blue and White Party of Benny Gantz won 32 seats. The Arab List, an alliance of four Arab parties, is making a great leap by securing 15 seats, after it was 13 seats in the previous Knesset (Israel's parliament). Monday's election was the third this year after Netanyahu and Gantz had failed to form a coalition government in the past two elections in April and September.

Keywords:
NetanyahuIsrael
Your comment has been forwarded to the administrator for approval.×
Warning! Will constitute a criminal offense, illegal, threatening, offensive, insulting and swearing, derogatory, defamatory, vulgar, pornographic, indecent, personality rights, damaging or similar nature in the nature of all kinds of financial content, legal, criminal and administrative responsibility for the content of the sender member / members are belong.
Related News