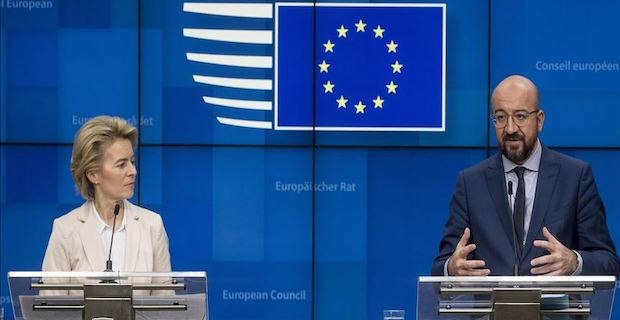 The EU and Turkey agreed to set up two working groups to clarify continued implementation of the 2016 migrant deal, European Council President Charles Michel announced on Monday after a visit by Turkish President Recep Tayyip Erdogan to Brussels.

Michel's remarks came in a joint press conference with European Commission President Ursula von der Leyen after talks with Erdogan on the 2016 EU-Turkey deal and the situation in Syria.

The parties agreed to task EU foreign policy chief Josep Borrell and Turkish Foreign Minister Mevlut Cavusoglu with continuing the discussions in order to clarify the position of both sides on implementation of the 2016 deal, Michel explained to journalists after the meeting.

He added that both parties are committed to maintaining a high-level political process.

Once the top diplomats draw a conclusion, EU heads of states and governments will be given a chance to discuss the result with the Turkish president, he said.

She said the partners were able to communicate openly despite their disagreements, adding: “This is a precondition to solve the crisis at the Greek-Turkish border.”

“Use of excessive force is completely unacceptable. Any actions of the authorities need to be proportionate,” she said when asked about Greek border guards using tear gas and rubber bullets on asylum seekers at the Greek-Turkish border.

Late last month, Turkey announced it would no longer stop asylum seekers from reaching Europe by land, while banning boat crossings as too dangerous.

Thousands of asylum seekers have since flocked to Turkey’s Edirne province – bordering Greece and Bulgaria – to make their way to Europe.

Turkey has criticized what it calls Greek authorities’ brutality towards the asylum seekers at the border.

In last month's decision, Turkey complained that the European Union had failed to keep its pledges under a 2016 deal on migrants, and warned of a new refugee wave coming from the embattled province of Idlib, Syria, along Turkey's southern border.

Under the 2016 deal, the EU was to provide €6 billion ($6.9 billion) financial assistance, while Turkey agreed to stop irregular migrants heading to Europe. But Turkey says less than half of that amount has been given.

Keywords:
European CouncilEU
Your comment has been forwarded to the administrator for approval.×
Warning! Will constitute a criminal offense, illegal, threatening, offensive, insulting and swearing, derogatory, defamatory, vulgar, pornographic, indecent, personality rights, damaging or similar nature in the nature of all kinds of financial content, legal, criminal and administrative responsibility for the content of the sender member / members are belong.
Related News