Race to jab 100,000 NHS staff is the Daily Mirror's take on the government's decision to make Covid vaccination compulsory for frontline health workers in England. T 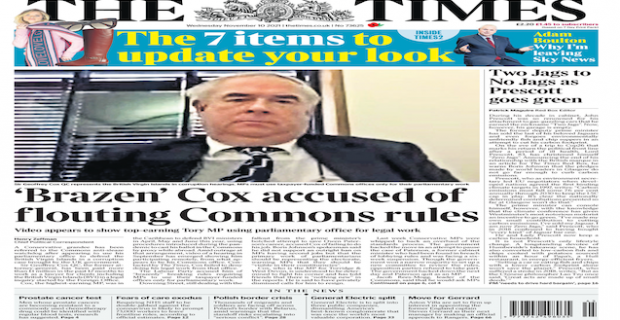 Race to jab 100,000 NHS staff" is the Daily Mirror's take on the government's decision to make Covid vaccination compulsory for frontline health workers in England. The paper says it has sparked fears that the NHS staffing crisis will deepen, with a union saying it will force more people to go. "Just do it!" cries the Daily Express front page, as it says Health Secretary Sajid Javid "laid down the law" to unvaccinated NHS staff, ordering them to have the Covid jab or face the sack.Meanwhile, care homes face a "cliff edge", says the i newspaper's front page, as their compulsory vaccination rules come into force on Thursday. The paper says tens of thousands are set to lose their jobs, major cities will face acute shortage of care staff and some care homes say they will not survive the winter. 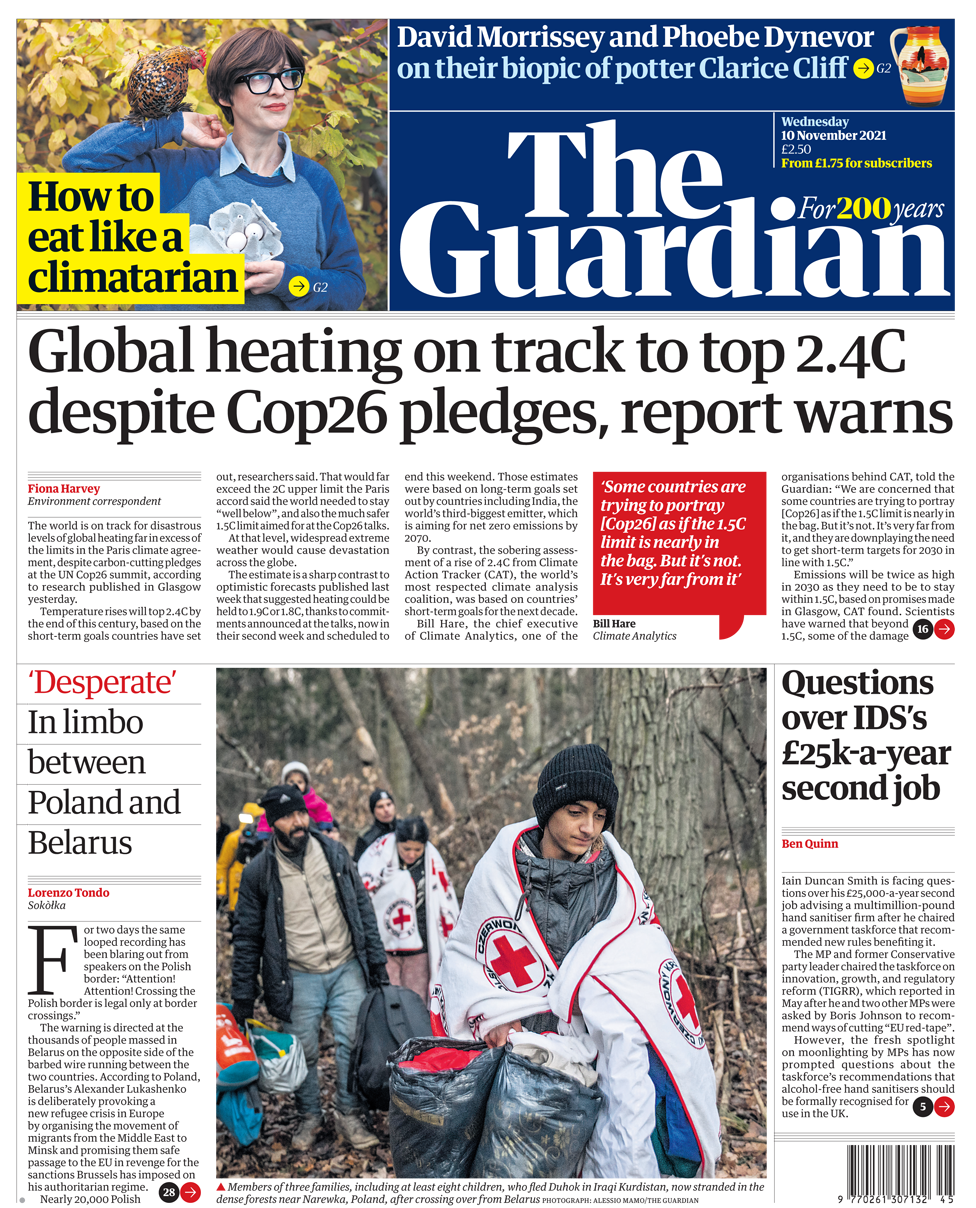 The Times follows up yesterday's stories about former Attorney General Sir Geoffrey Cox's second job earning hundreds of thousands of pounds defending the British Virgin Islands against UK allegations of corruption. The paper says video appears to show him using his Commons office for his legal work, in apparent breach of the rules - though it suggests the ToryMP is determined to defend himself and has privately dismissed calls to resign.

A warning that the planet is on course to heat up by 2.4C despite pledges to reduce greenhouse gas emissions at the COP26 climate summit leads the Guardian. The paper says the rise by the end of the century would mean widespread extreme weather that causes devastation across the globe.A different COP26 story leads the Daily Star, which criticises a "Green Party moron" for taking a "gas guzzling jet" to the save-the world summit. The paper suggests Brighton council leader Phelim Mac Cafferty is an "eco hypocrite". 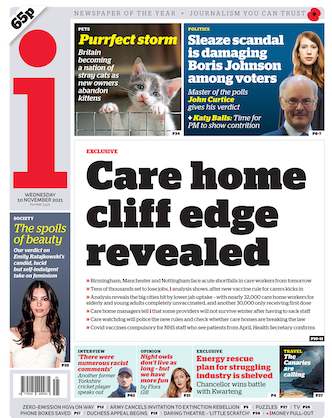 The Financial Times front page features an image of a man carrying a child on the Belarus-Poland border, where Polish troops are on guard amid claims from the EU that Belarus has engineered a crisis involving thousands of migrants. Its lead story says General Electric is to break up into three separate companies focused on healthcare, energy and aviation."Fury" about the proposed sale of insurer LV - currently owned by its 1.2 million members - to private equity "predators" Bain Capital is the lead story in the Daily Mail. The paper says private equity companies have become notorious for taking quick profits while slashing jobs and leaving behind long-term problems.

The Daily Telegraph continues its critical coverage of a donation by Max Mosley - of money inherited from his father, fascist leader Oswald Mosley - to Oxford University. Education Secretary Nadhim Zahawi has said Oxford should explain to Jewish students why it took the £6m and says anti-Semitism is a "present danger" at universities. 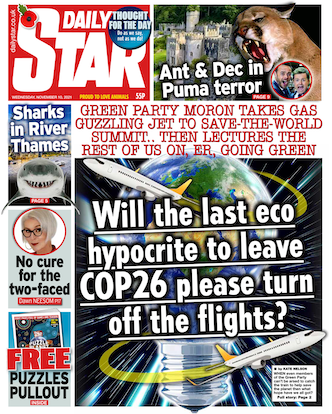 And the Sun features an interview with Katie Price, saying she has "broken her silence" about her drink-drive crash in September, in which she overturned her BMW. She told the paper: "I could have killed someone."

The Times says the Conservative MP, Sir Geoffrey Cox, is understood to be determined to fight his corner - following accusations by Labour that he has "brazenly" broken parliamentary rules by using his Commons office for his legal work.According to the paper, he is said to have privately dismissed calls to resign.

The Guardian says the former Conservative leader, Sir Iain Duncan Smith, also faces questions about his second job.He is paid £25,000 a year as an adviser to a hand sanitiser manufacturer, Byotrol.The paper says the company benefited from new rules recommended in May by a government taskforce chaired by Sir Iain. 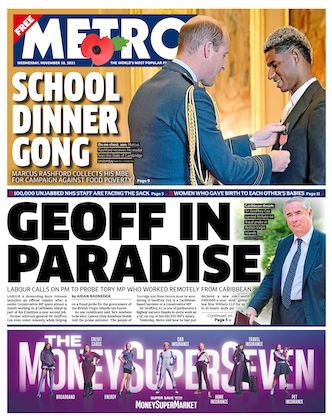 The firm makes alcohol-free hand sanitisers, and the taskforce said that such products should be formally recognised for use in the UK. Neither Sir Iain nor the firm have commented.
Under the headline "BoJo COPs out of sleazegate... again", the Sun accuses the prime minister of dodging questions about his failed attempt to protect the MP, Owen Paterson, after he was found to have breached parliamentary rules.

The paper says Mr Johnson is "bolting" back to the climate conference in Glasgow today, rather than the weekend as had been planned.
A senior Tory MP commented that the situation must be bad when the prime minister sees Scotland as safer than Downing Street.

The Financial Times says Tory backbenchers fear Mr Johnson's botched handling of the issue and his refusal to say sorry have created a hostile environment in which the media will now hunt for stories about the conduct of MPs and peers.An MP told the paper there was now a narrative about sleaze and people in the party were "really angry with Boris". 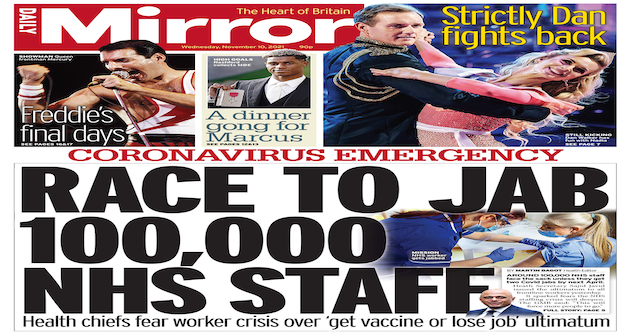 The i newspaper warns that tens of thousands of unvaccinated care workers in England are set to lose their jobs when new rules requiring them to be double-jabbed come into force on Thursday.Care home managers have warned that some providers will not survive the winter after having to sack staff.
The paper says there could be acute shortfalls in Birmingham, Manchester and Nottingham - the cities that have lower vaccine uptake among care workers than the rest of the country.
Some of the front pages feature pictures of migrants - many of them from the Middle East and Afghanistan - who are trying to cross from Belarus into Poland, hoping to reach Germany.

Keywords:
Race To Jab 100000 NHS StaffBritish Newspaper Headlines
Your comment has been forwarded to the administrator for approval.×
Warning! Will constitute a criminal offense, illegal, threatening, offensive, insulting and swearing, derogatory, defamatory, vulgar, pornographic, indecent, personality rights, damaging or similar nature in the nature of all kinds of financial content, legal, criminal and administrative responsibility for the content of the sender member / members are belong.
Related News