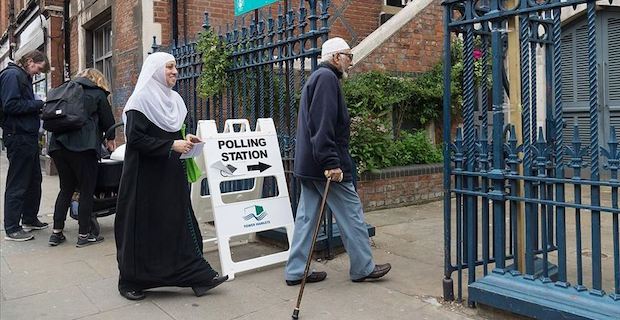 Islamophobia and anti-Muslim rhetoric in the U.K. remain the main issues to be handled by any political candidate as the country prepares to face one of its most crucial elections.  Abdullah Faliq, head of research at the Cordoba Foundation, says British Muslims traditionally vote for the Labour Party, but it would not be right to “pigeonhole” a whole community politically. Speaking to Anadolu Agency, Faliq said this week’s general election will be “crucial,” as it will “shape the future of our society.”

He said the issues associated with Muslims in terms of this election are Islamophobia, anti-Muslim hatred, job markets, discrimination at the workplace and education.

Faliq also underlined that far-right elements in the U.K. use the issues of immigration and terrorism in their campaigns.

“With the current situation over the Brexit debate, things are not so easy,” he said.

“The far right and other elements who are coded racists and coded Islamophobes are taking the political sphere and trying to campaign on issues around immigration, security and terrorism, but essentially they are targeting the Muslim community.”

Faliq, not revealing which party he will vote for, said one should “vote for someone who would listen to your needs and also be able to help you.”

He said British Muslims are looking for candidates who would look after their needs locally first and also nationally.

“People are looking for candidates who want to work toward the unity of the country and the best interests of British society as a whole and not to promote hate and division.”

He said Muslims in the U.K. feel “isolated” and are “talked to but not spoken to properly,” and the Muslim community -- the second biggest and fastest growing religious group in the country -- should have more representatives in the political arena.

Zainab Gulamali, public affairs manager of the Muslim Council of Britain (MCB), said the main concern of British Muslims about this election according to a survey they have conducted is Islamophobia.

“We see a clear commitment to tackle Islamophobia” in the manifestos of the Labour Party, Liberal Democrats and other smaller parties, Gulamali said, speaking to Anadolu Agency.

“Unfortunately, we didn’t see this kind of commitment especially on Islamophobia in the Conservative Party manifesto,” she said.

“As we know, the Conservative Party has an institutional and widespread problem with Islamophobia that it has consistently failed to tackle.”

Gulamali underlined that Muslims will look at how political parties are committed to tackling this problem while choosing a candidate to vote for in this week’s election.

She said the MCB has done a lot of work to encourage Muslims to get registered to vote and actually vote on the day of election and they hope the Muslim turnout in this election will be high.

Gulamali also said they ran some analyses on marginal votes and in which constituencies Muslim votes would make an impact.

For example, the current MP in Kensington has a majority of 20, but there are 270 times more Muslims eligible to vote in the constituency, she said, adding there are 31 constituencies similar to Kensington.

If all Muslims go and vote from this point of view, “we may see a very different looking government on Friday,” she added.

Azad Hussain from the Al Isharah, a sign language education charity in east London, said “especially since the last government and the EU referendum, we have noticeably seen a sort of racist propaganda increase.”

Hussain said the holders of high offices and even the prime minister do not use an accommodating language.

“One of the key considerations for somebody like myself as a British Muslim is what are the attitudes of a person in power towards other faith groups or religions or races,” he said.

“There are a number of things that need to be changing.”

The standards of the press is one of them, he said.

“It seems to be ok to malign one group within the press and not so much the other,” he said, adding headlines about Muslims are always in a negative sense.

Hussain said politicians also need to be held to account as many of them have come out with not only anti-Islam but also anti-Semitic sentiments.

“That is not something as responsible people who hold an office should be doing.”

U.K. voters will go to polls on Thursday to elect new members of the House of Commons.

Keywords:
Islamophobia
Your comment has been forwarded to the administrator for approval.×
Warning! Will constitute a criminal offense, illegal, threatening, offensive, insulting and swearing, derogatory, defamatory, vulgar, pornographic, indecent, personality rights, damaging or similar nature in the nature of all kinds of financial content, legal, criminal and administrative responsibility for the content of the sender member / members are belong.
Related News