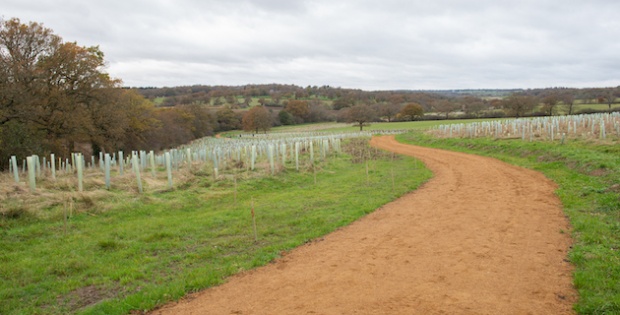 Work has begun to plant another 50,000 trees at Enfield Council’s extensive woodland restoration project, to mark the start of the winter planting season and to celebrate National Tree Week.Enfield Council was joined by volunteers and pupils from Galliard Primary School Edmonton, along with the Deputy Mayor of London for Environment and Energy, Shirley Rodrigues, at Enfield Chase on Tuesday (30 November), to help plant trees in London’s largest, current, woodland project.The 60 hectares of woodland restoration and rewilding will play a critical role in reforesting the capital, increasing residents’ access to nature and combating the effects of climate change. Around 50,000 trees were planted last winter and the start of this year’s National Tree Week marks the planting of at least 50,000 moreThe trees at Enfield Chase will help absorb carbon dioxide which means they can help to stop rising temperatures, keep soil moist and reduce the risk of flooding to homes and the surrounding area. It is estimated that 100,000 trees can capture around 234 tonnes of carbon emissions per year which will help the Council offset the emissions it cannot currently reduce supporting our drive to be a net zero council and borough.

As part of the Council’s Blue and Green Strategy, there is a target to plant more than 300 hectares of publicly accessible woodland across the borough.

Enfield Council’s Deputy Leader, Cllr Ian Barnes, said: “This is a far-reaching and ambitious project and it was great to plant some saplings with Galliard Primary School’s young ‘eco-councillors’. This woodland will deliver a wide range of environmental and socio-economic benefits to the area, will reduce flooding and increase bio-diversity. Importantly, this woodland is just the start of a broader project. Enfield Council is creating an urban forest environment of tree-lined streets, easily accessible open spaces, new native woodland and food-growing sites, cleaner air and better wellbeing for all.”

“I’d like to take this opportunity to thank the volunteers who are doing a magnificent job at Enfield Chase. We appreciate their dedication and passion for this landmark project.”

Deputy Mayor for Environment and Energy, Shirley Rodrigues said: “This fantastic woodland creation project in Enfield Chase shows how we can re-wild London and help make our city more resilient to a changing climate. It's great to see so many partners working together to support this large-scale and transformative project which will see a total of 100,000 trees planted, as well as opening up walking and cycling access to the new woodland. 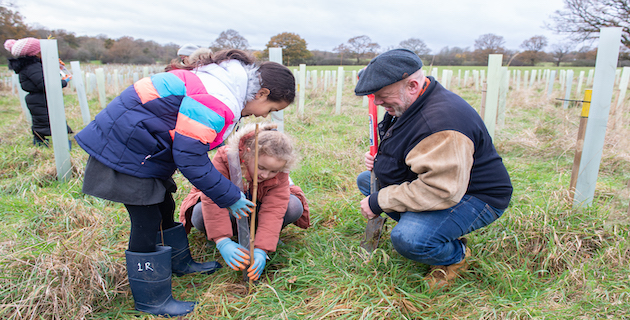 “The Mayor has made huge strides in increasing and protecting the capital’s green spaces, securing London’s status as the world’s first National Park City. As part of his investment of over £20 million to help green London, a record 350,000 trees have already been planted. This National Tree Week we're encouraging Londoners and businesses to get involved in making our city greener and helping plant trees.”

To help Enfield celebrate National Tree Week, Deputy Mayor Rodrigues, Cllr Barnes and Cllr Rick Jewell, the Cabinet Member for Environment, were given the opportunity to plant trees alongside the school children. They also joined a tour that took in the construction of mini wetlands and a newly created footpath along the route of the London Loop which will connect Trent Park with the Ridgeway. The day had a particular resonance as last year’s planting season was conducted under the cloud of the COVID-19 pandemic, which restricted the participation of volunteers. 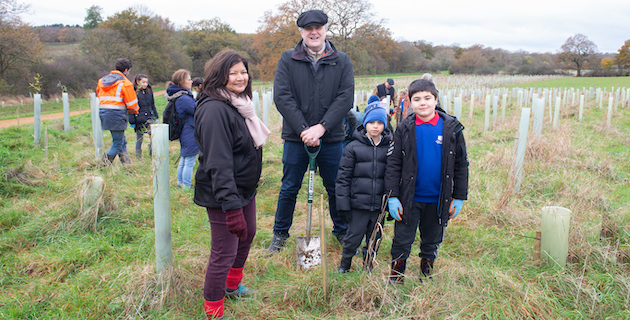 The Enfield Chase Woodland Restoration Project is designed and led by Enfield Council with support from waterways charity Thames21, the project’s delivery partner. Many volunteers are lining up to get involved and a Friends group is being created to make sure a lasting legacy is left for the people of Enfield.

The Mayor of London awarded Enfield Council £748,000 to kick start the first phase of the woodland restoration and the Council contributed a further £150,000. Further financial support has come from the Department for Environment, Food & Rural Affairs’ Green Recovery Challenge Fund, delivered by the National Lottery Heritage Fund in partnership with Natural England, the Forestry Commission and the Environment Agency. The number of agencies involved demonstrates the significance of such a project being delivered in London and providing benefits for people much more widely.Alongside the tree planting, the project includes the development of an important community volunteer programme, targeting the most deprived areas in Enfield to empower individuals and communities to manage their blue-green spaces better, alongside providing accredited training for around 60 people. Enfield Council is also keen to reintroduce native animals such as beavers and goshawks – follow #ClimateActionEnfield to find out the latest on this.Anyone interested in getting involved in the tree planting season between now and February 2022 should take a look at Thames21’s events schedule at: https://www.thames21.org.uk/events/

Keywords:
Enfield Chase ProjectEnfield CouncilEnfield Councils Extensive Woodland Restoration
Your comment has been forwarded to the administrator for approval.×
Warning! Will constitute a criminal offense, illegal, threatening, offensive, insulting and swearing, derogatory, defamatory, vulgar, pornographic, indecent, personality rights, damaging or similar nature in the nature of all kinds of financial content, legal, criminal and administrative responsibility for the content of the sender member / members are belong.
Related News