Salih Khater, 29, is charged with 2 counts of attempted murder in 'terrorism case' 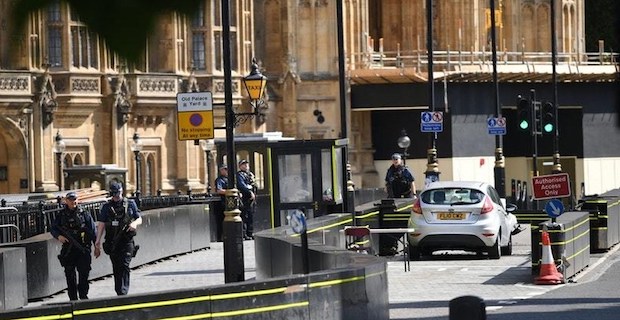 A man who was arrested after he crashed his car on security barriers outside the House of Parliament last week has been “charged with two counts of attempted murder,” police said late Saturday.Salih Khater, 29, will appear at Westminster magistrates’ Court on Monday, the Metropolitan Police said in a statement.

Khater, a British national originally from Sudan, “drove his car into a stationary group of members of the public then at police officers” last Tuesday, injuring three cyclists and pedestrians.

“Due to the methodology, iconic location and the alleged targeting of civilians and police officers, the CPS are treating this case as terrorism,” the statement added.

Khater is reported to have driven from his home city, Birmingham, to capital Monday night and drove around the city’s busy streets, including the Tottenham Court Road until the morning hours.

He was arrested “on suspicion of terrorism” and British counter-terrorism police raided addresses in Birmingham and Nottingham since the incident, including Khater's apartment.

Security barriers have been in place as part of enforced security around the parliament building after a terror attack last year, which killed five people and injured up to 50 others.

In a terrorist attack in March 2017, Khalid Masood, 52, killed four people on Westminster Bridge when he mowed pedestrians down, before stabbing a police officer who was on duty in front of parliament.

Keywords:
Westminster Car CrashSalih KhaterHouse Of Parliament
Your comment has been forwarded to the administrator for approval.×
Warning! Will constitute a criminal offense, illegal, threatening, offensive, insulting and swearing, derogatory, defamatory, vulgar, pornographic, indecent, personality rights, damaging or similar nature in the nature of all kinds of financial content, legal, criminal and administrative responsibility for the content of the sender member / members are belong.
Related News