Time is up for Truss? Rumors! British Prime Minister analysis

Pressure on British Prime Minister Liz Truss has mounted immensely this week following the reversal of almost all points of her mini-budget by the new finance minister. 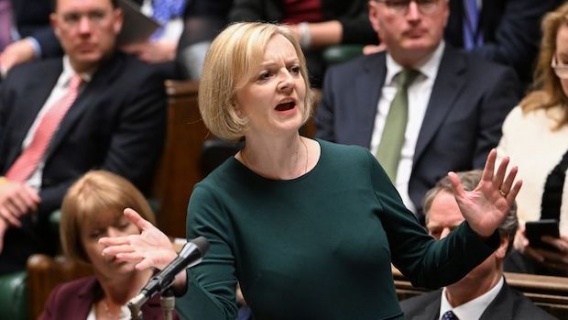 Ahmet Gurhan Kartal   | AA - The writer is a London-based correspondent for Anadolu Agency’s English News Desk, covering the UK.-LONDON.ANALYSIS - What lies ahead for Liz Truss as number of disgruntled Tory MPs rises?Recent opinion poll puts Conservative Party at 20%, more than 30 points behind Labour Party, amid economic turbulence in UKPressure on British Prime Minister Liz Truss has mounted immensely this week following the reversal of almost all points of her mini-budget by the new finance minister.Truss, who has been the UK’s prime minister since Sept. 6, sacked Kwasi Kwarteng, whom she appointed as the treasury chief as soon as she took the top government office, only after 38 days.Kwarteng was sacked after reversing the top rate tax cut decision, which was one of the main policies of the mini-budget he revealed on Sept. 23, following the tumultuous run of the British economy and the pound tumbling to record lows. The Bank of England had to intervene twice to keep a balance and stabilize the markets.However, the economy was still to recover, even after the appointment of the new chancellor of the exchequer, Jeremy Hunt, a former Cabinet minister, who on Monday reversed the tax cut decision for low earners, another main policy of the mini-budget. 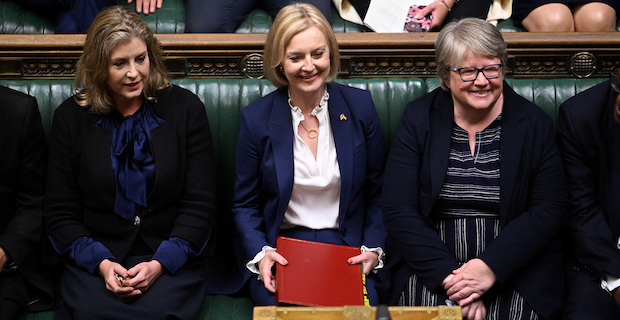 Scared of her own shadow

On Monday, Truss’s absence from the House of Commons during an urgent question on the recent change in the exchequers was ridiculed by opposition leader Keir Starmer.Starmer said, “the country is in an economic crisis made in Downing Street because they’ve lost all credibility.”“Government borrowing costs have soared, mortgage rates have ballooned. Markets need reassuring and there is the long-term damage that can’t be undone,” he added.“Once you’ve crashed the car 100 miles an hour, you’ve damaged it for good and you’re going to be paying much more on your insurance for years to come. And it’s working people who will pay.”

Starmer said Truss was “hiding away” and she was “scared of her own shadow.”

Penny Mordaunt, the Commons leader, repeatedly said Truss was not in the House of Commons as she “is detained on urgent business.” 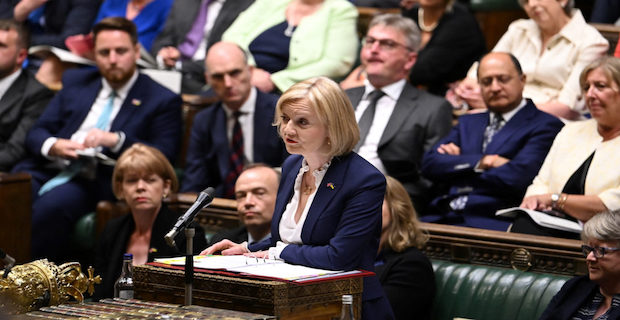 Time is up for Truss?

The number of disgruntled Tory MPs over the fiscal policies, economic turmoil, U-turns, and most of all the most recent polls – one of which shows the party at 20%, a rate much lower than what former Prime Minister Boris Johnson had before he left the Downing Street – increased in the past week.Besides the opposition parties, MPs Crispin Blunt, Andrew Bridgen, Jamie Wallis, and Angela Richardson are among the Tory lawmakers who have all called on Truss to step down publicly.“I think the game is up and it’s now a question as to how the succession is managed,” Blunt told Channel 4 News.Meanwhile, senior members of the party’s 1922 Committee, which forced previous premiers, Johnson and Theresa May, out of the top office, have reportedly held secret talks to discuss the possibility to replace Truss as prime minister.However, 240 of the current 360 MPs are needed to request a change on the “grace period” rule – which prohibits a leadership challenge for 12 months when a new leader comes in. And without the rule being changed, a fresh leadership race cannot be triggered.

As it would, the rumors on the future of Truss in the dark and long corridors of the House of Commons are also being heard.Reportedly, some Cabinet and junior ministers are getting ready to resign to give Truss a hard time to show her out in a way that Johnson was forced out of months ago.Some ministers may be resigning within the next 48 hours, according to local media reports.However, speaking to Sky News on Monday evening, Hunt said he believes Truss will still be prime minister at Christmas.The new chancellor called on Conservative MPs to “give her a chance.”“People who want her to go need to ask themselves whether more political instability is going to keep mortgage rates down,” he said.“I don’t think political instability is the answer. She’s been prime minister for about five weeks and we need to give her a chance.”Hunt also dismissed ever running for the top job himself.“I rule it out, Mrs. Hunt rules it out, three Hunt children rule it out.”Ahmet Gurhan Kartal   | AA - The writer is a London-based correspondent for Anadolu Agency’s English News Desk, covering the UK.-LONDON.ANALYSIS