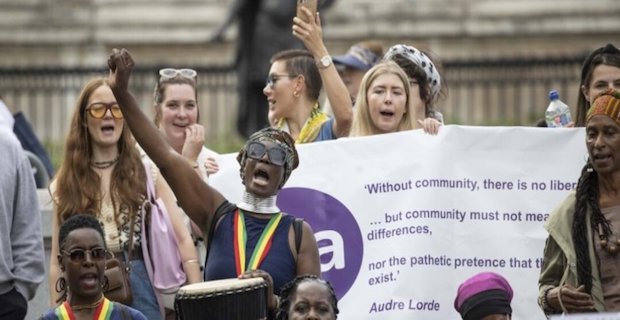 Ahmet Gurhan Kartal/ AA-LONDON-More than a hundred women in London marched 16 kilometers (10 miles) on Tuesday to highlight women's fear and "malignant racism and misogyny" against Black women.The march, organized by the Women's Equality Party, stretched from Fryent Park in northwest London to the Metropolitan Police headquarters, known as the New Scotland Yard.It came on the second anniversary of the murder of two sisters, Nicole Smallman, 27, and Bibaa Henry, 46, in Fryent Country Park, Wembley.The sisters, who were both daughters of the Venerable Mina Smallman -- the first-ever female archdeacon of a Black and minority background -- went missing after celebrating Henry's birthday in the park, with their bodies found there 36 hours later. Both had died of stab wounds.Two police officers sent to guard the bodies and the scene were later on charged and jailed for taking selfies with the bodies and sharing them, fueling the anger towards the police force amid uproar against increasing institutionalized racism and misogyny against Black women.The march, dubbed the March on the Met, gathered more people at Trafalgar Square and reached the New Scotland Yard building in central London, where speakers gave voice to their reactions.

"If they won't accept their institutional racism and misogyny, they are never going to fix the problem -- anything less is all reputation management."

Patsy Stevenson, who was famously photographed handcuffed as she was arrested in March 2021 by Met police officers during a vigil for Sarah Everard, a victim whose kidnapping and murder by an off-duty police officer sent shockwaves across the country, was also among speakers.

"The police need to have accountability, listen to people, confront their misogyny and racism and actually change the way they act -- and stop abusing women," Stevenson said.

"What happened to Bibaa and Nicole is the story of our country," said Mandu Reid, leader of the Women's Equality Party.

She wrote on Twitter: "They were murdered by a young man radicalised on the internet. We don't talk about how misogyny permeates every aspect of our society.

"What's also the story of our country is how some victims matter more than others. How the violence women face is not treated with the severity it should be. Misogyny and racism is baked into where power is held. We are here to write a different ending to that story."

Meanwhile, the London Metropolitan Police apologized on the second anniversary of the sisters' murders to their mother, family, and friends.

"We are very sorry for the way we responded," a Met spokeswoman said.

"Our thoughts and deepest sympathies are with Mina Smallman and the family and friends of Nicole and Bibaa for their tragic loss," she added.

"The level of service we provided was below the standard it should have been and no doubt compounded the distress felt by their loved ones."

Keywords:
LondonNew Scotland YardDouble Murder In London ParkWomens EqualityFryent ParkMetropolitan Police
Your comment has been forwarded to the administrator for approval.×
Warning! Will constitute a criminal offense, illegal, threatening, offensive, insulting and swearing, derogatory, defamatory, vulgar, pornographic, indecent, personality rights, damaging or similar nature in the nature of all kinds of financial content, legal, criminal and administrative responsibility for the content of the sender member / members are belong.
Related News