DOLLAR 16,78
EURO 17,50
GOLD 976,05
BIST 2.443,77
Covid infections are rising again across the UK, the latest figures from...
Turkish and British business people gathered at the TBCCI Networking Event
22 point plan to tackle aviation disruption ahead of summer season
North Middlesex University Hospital staff ready for cycling trial
Number of people killed on London’s roads in 2021 fell to the lowest...
Enfield Summer Uni 2022 is back bigger and better
Turkish Republic of Northern Cyprus announced new measures for Covid 19...
TfL will begin fining motor vehicles caught driving in mandatory cycle...
Trains do not run across England over pay, planned job cuts as biggest...
A national scrappage scheme must be funded by Government 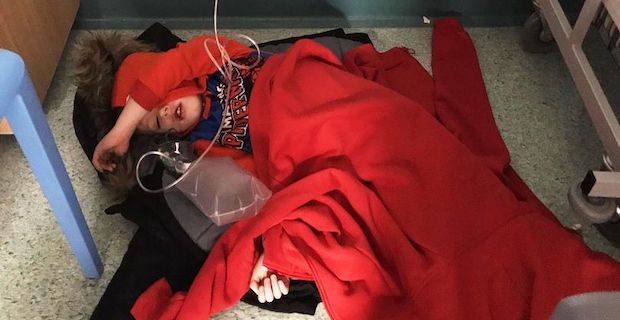 A little boy with suspected pneumonia was forced to sleep on a cold hospital floor for more than four hours because of a shortage of beds. His desperate mum Sarah Williment covered her four-year-old son Jack in coats in a bid to keep him warm and comfortable. And when he was eventually moved to a ward, the youngster endured another five hours on a trolley before a bed was found.

Now, after witnessing the crisis in the NHS at first hand, Sarah, 34, has vowed she will vote Labour for the first time in her life in Thursday’s General Election .

In an exclusive interview with the Mirror, Sarah, who had nothing but praise for the medical staff, said: “I am frustrated about the system and the lack of beds, which I am presuming is due to a lack of funding to the NHS to deliver the services that are required.”

He said: “This is shameful. Boris Johnson should personally apologise to Jack and his family. A decade of Tory cuts has brought us to this crisis in our NHS.

“If the Tories win on Thursday, patients including children will suffer five more years of this. We need a Labour government to save our NHS.”

Mum-of-two Sarah took Jack to her GP on Tuesday last week after he fell ill.

The teaching mentor said: “Jack had been very unwell for six days. He was vomiting, had diarrhoea and a fever and was coughing.

"We had been to the GP once and they thought it was virus.”

But when Jack did not improve and was refusing to eat, Sarah returned to the surgery, where the doctor called an ambulance, fearing he had pneumonia.

Jack and his worried mum were ‘blue-lighted’ to Leeds General Infirmary, West Yorkshire, where she said he was seen “very quickly” and given a bed and oxygen in A&E.

Keywords:
NHSPneumonia
Your comment has been forwarded to the administrator for approval.×
Warning! Will constitute a criminal offense, illegal, threatening, offensive, insulting and swearing, derogatory, defamatory, vulgar, pornographic, indecent, personality rights, damaging or similar nature in the nature of all kinds of financial content, legal, criminal and administrative responsibility for the content of the sender member / members are belong.
Related News