I have also personally helped this structure, Erdogan says

President Erdoğan delivered a speech at the Extraordinary Religious Council with July 15 on its agenda. 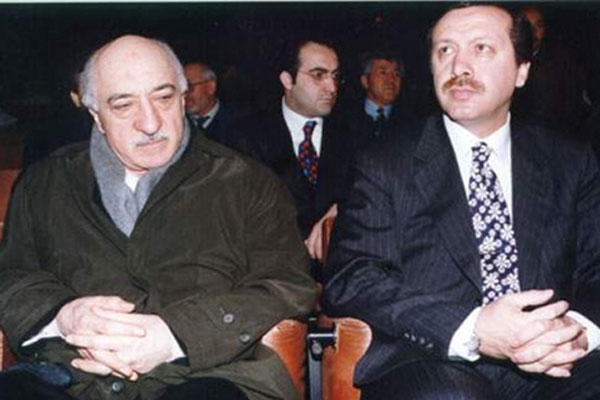 President Erdoğan delivered a speech at the Extraordinary Religious Council with July 15 on its agenda. Following are highlights from President’s remarks:

"The armed coup attempt of July 15 constituted the bloodiest and most daring step in this process.

The peculiarity of this terrorist organization at the centre of this incident that closely concerns the survival of our state and nation is that it presents itself as a religious structure, a religious community, an institution of religious service.

It is because this treacherous structure identifies itself with religious values that it has managed to survive and constantly spread like a cancerous cell, a contagious virus within our society for the last 4 decades.

Like other groups, I have also personally helped this structure assuming that we met on a common ground although there were many aspects I did not approve.

Despite our concerns regarding the leader of the structure and its followers, we have shown tolerance for the sake of the extensive education and aid activities they seemed to carry out both domestically and abroad.

We did not and could not see, however, that this organization, which appeared to be headed towards the same destination via a different path, had utterly different intentions and devious plans.

Actually, since 2010 and particularly after 2012, we had our reservations regarding this structure.

In this period, I also had serious doubts about the operations and trials against the Turkish Armed Forces personnel.

I was not convinced by the justifications provided for the accusations and arrests of some commanders that I knew very closely and worked together for years.

In a similar vein, I was seriously disturbed by the vast powers possessed by their followers in the public and private sector as well as their attitude of denying the right to exist for others.

Back then, however, I had difficulty explaining this even to my own friends.

The coup attempt of December 17-23, 2013 was the first move that blatantly revealed the true face of this treacherous organization.

Let me underline one point.

If it wasn’t for the precautions taken after December 17-25, this coup attempt would probably pose a much bigger threat with the participation of police, judiciary and other elements of bureaucracy rather than solely an armed group within the military.

We have eradicated this nuisance, thanks to the patience, courage, fortitude and struggle carried out by the seventy-nine million altogether.

Now is the time to on one hand call those responsible to account for this treacherous attack on our country and our nation and on the other to do accounting.

From now on, everyone who continues to pay attention to the delusions of the charlatan, the chief terrorist, in Pennsylvania, has accepted in advance what will become of them.

Of course, the most important feature of this structure is the members’ transformation of hypocrisy, lies, soullessness and permanently wandering around with a mask into their character in the name of "precaution" and "deception".

We have fulfilled our warning duties throughout the years.

Hereafter, it is now a period for struggle and accountability in every sense of the term.

Because hypocrisy runs in the blood of this structure, we have serious doubts about those that say they regret it.

We find it difficult to understand whether they really do regret it, or are in a state of hypocrisy which has become the hallmark of their betrayal network.

Of course, the statement is the base for us; we will not apologize however, for not lowering our guard fully against such people.

The biggest theft, however, is stealing people’s religion, belief, sincerity and hope.

Gülenist Terror Organization, as the biggest thief network in history, has stolen tens of thousands of peoples past and future.

Turkey based on this experience, needs to pull together and question itself regarding religious life and religious institutions as it has in all areas.

Therefore, considering this calamity as opportunity, evaluating the 1400 years of experience in the best way, we must start a process together checking our structure from head to toe in order to correct our mistakes, to complete the shortcomings within us.

If we do not do this now, we will continue to deal with other similar deviance tomorrow.

Protecting all the material and spiritual heritage of our country, against all types of threats such as religious, ethnic, ideological that shows signs of conversion into a centre for disorder and corruption, we must unite under the same flag.

I believe that this council will be a platform to evaluate, think and talk about all these problems.

I thank you in advance for your contribution."