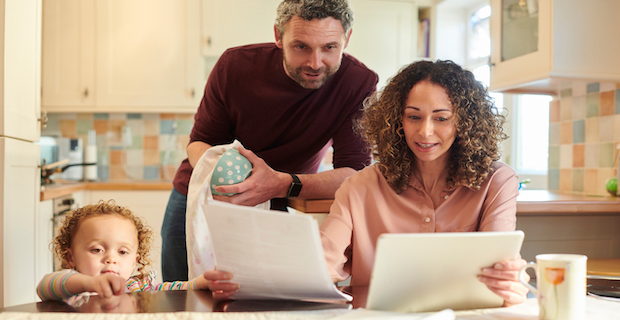 From 1 October, households should have begun to receive the first instalment of the government's Energy Bill Support Scheme.But figures from one in-store payment company revealed that only half of the expected value had been redeemed.A government spokesperson told customers to have their credit applied to their meter as soon as possible.The Energy Bill Support Scheme was first announced by government in May and applies across England, Scotland and Wales.Under the scheme, everyone's energy bill will be cut by £400. This will be applied over six months, with a reduction of £66 in October and November, and £67 every month between December and March 2023.For customers who have a traditional prepayment meter, which requires topping up via a key or card in a local newsagent or Post Office, the help with energy bills comes in the form of a voucher.
Payment company PayPoint told BBC News that it expected to process 800,000 vouchers in October, worth a total of £52.8m.

However, the business said only £27m had been redeemed.

PayPoint and fuel poverty charities are urging any prepayment customers to go through their post in case they have missed the delivery, particularly as the vouchers are only valid for 90 days.The vouchers, which suppliers are sending out by post, email or text, can also be redeemed with the Post Office and at PayPoint stores.More than four million people have a prepayment meter, and around half of those are the older, non-smart type of meter, according to the energy watchdog Ofgem."It's so important that everyone gets the support they're entitled to," said Gillian Cooper, head of energy policy at Citizens Advice.She also called on customers to ensure their contact details were up to date and reach out to their suppliers if they had not heard anything on the assistance yet.Customers do not need to apply for the assistance, but how it is paid varies by supplier and payment method.2px presentational grey line

How will I receive my payment?

Fixed monthly Direct Debit: EonNext , Shell, Octopus Energy, SOEnergy and Bulb will deduct £66 or £67 from each monthly bill, meaning you may pay slightly less or could adjust your payments to build up credit for the winter months.British Gas, Scottish Power, OvoSSE and Utilita will refund your money back to your bank account after you've made your monthly payment.Monthly bills based on what you use: British Gas, Shell, Bulb, SOEnergy and Utilita will knock £66 or £67 off your bill, effectively as a discount.EonNext, Octopus Energy and OvoSSE are applying the £66 or £67 as credit, which will likewise reduce the total bill.Smart prepayment meter: Suppliers will add credit automatically to your meter - in most cases the electric one, but Shell splits it 50-50 between gas and electric automatically.Most major suppliers told the BBC this is done in the first week of the month.Traditional prepayment meter, topped-up at a shop: For these customers, vouchers will be sent in the post by all the main suppliers.The vouchers are redeemable at Post Office, PayZone or PayPoint, where customers usually top up. For most suppliers, the voucher should arrive in the post by 17th of each month and is only valid for 90 days.2px presentational grey lineResearch by comparison website Uswitch recently suggested that the energy crisis is pushing more people onto prepayment gas and electricity meters.Suppliers may put customers on prepayment meters if they struggle to keep up with bills, because it helps them control how much and how often they pay for energy.Tariffs on prepayment meters also tend to be more expensive, however, with Uswitch suggesting this leaves some customers more vulnerable and at risk of being disconnected.In September, Citizens Advice also issued a warning that half a million more people could be forced onto prepayment meters due to debts to suppliers."Before winter has even hit, we're seeing far too many people who can't afford to top up their prepayment meter. That means going without access to the very basics like a hot meal,"Gillian Cooper at the charity added."If you're in debt, your supplier has a duty to make sure you're only paying what's affordable. That includes reducing any debt repayments you're making," she advised.A spokesperson for the Department for Business said that the "government has worked quickly to deliver the Energy Bills SupportScheme, helping a broad range of households struggling with energy bills this winter including £1,200 direct payments being made to vulnerable households."They called on customers to have their credit applied to their meter as soon as possible so that they can benefit from the scheme.Many people on money saving websites have also said energy companies had delayed sending out the vouchers so far. By Rebecca Wearn/ Business reporter, BBC News

Keywords:
Help With Energy BillsEnergy BillsRedeemed VouchersEnergy Bill Support Scheme.
Your comment has been forwarded to the administrator for approval.×
Warning! Will constitute a criminal offense, illegal, threatening, offensive, insulting and swearing, derogatory, defamatory, vulgar, pornographic, indecent, personality rights, damaging or similar nature in the nature of all kinds of financial content, legal, criminal and administrative responsibility for the content of the sender member / members are belong.
Related News