All flights suspended at Stansted Airport

All flights have been suspended at Stansted Airport after it was forced to close its runway due to bad weather. 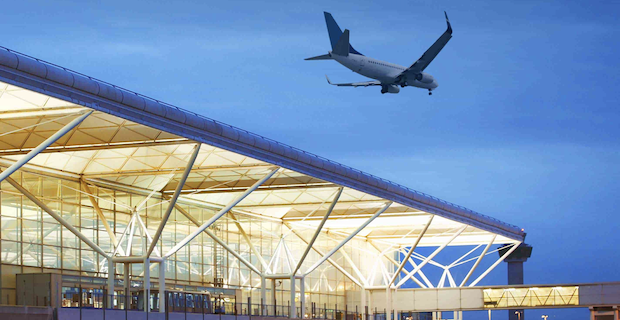 Heathrow and Gatwick also cancelled or delayed flights after snow, ice and freezing fog swept the UK.  A yellow weather warning remains in place for Scotland, London and south-west England until Monday morning, with the disruption set to continue.  Trains have also been delayed and drivers warned to take care after several motorway accidents.  Stansted said on Sunday night its only runway was closed to allow for snow clearance due to weather conditions and all flights were suspended.

"Delays to flights were experienced earlier due to de-icing of aircraft which is a ground handler's responsibility and safety of aircraft and passengers is paramount," a spokesman added.  "Passengers are advised to check with their airline for current status of their flights."

James Love told the BBC he was stuck on a Loganair plane at Stansted for several hours which was unable to take off.

"The captain wanted to de-ice the wing," he said. "But by the time the ground crew had come over to do that and the plane was ready, the runway shut and we had to return to stand." However, he said the crew had been great and made the "whole thing a lot better, or at least as good as can be for this kind of situation".

More than 50 flights were cancelled at Heathrow on Sunday, after freezing fog resulted in air traffic control restrictions on the number of aircraft that could land and depart per hour . The airport said it was keeping passengers safe and trying to get them to their destinations as quickly as possible.  "We encourage passengers to check their flight status with their airline for the latest information," a spokeswoman said.  British Airways, the Heathrow's biggest airline, said it had apologised to customers and was refunding or rebooking anyone whose flight had been cancelled and providing refreshment and hotel vouchers where needed. It said Heathrow was going to restrict flights in and out of the airport again on Monday, meaning more disruption. 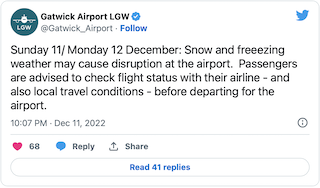 Keywords:
Stansted AirportBad WeatherHeathrow AirportGatwick Airport
Your comment has been forwarded to the administrator for approval.×
Warning! Will constitute a criminal offense, illegal, threatening, offensive, insulting and swearing, derogatory, defamatory, vulgar, pornographic, indecent, personality rights, damaging or similar nature in the nature of all kinds of financial content, legal, criminal and administrative responsibility for the content of the sender member / members are belong.
Related News