Woman breaks down on BBC Question Time over tax credits 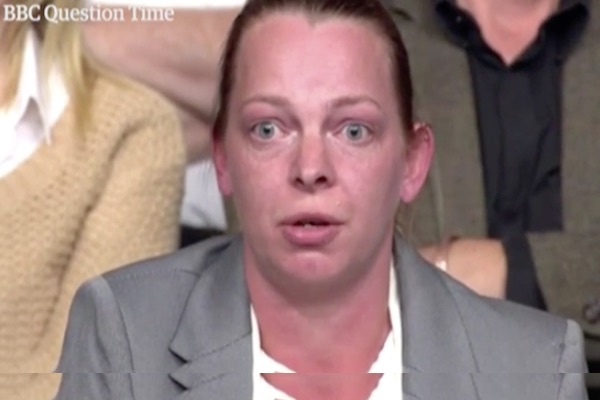 It is a moment of anguish that should have caused discomfort in both No 10 and No 11. “You’re about to cut tax credits when you promised you wouldn’t,” an anguished mother yelled from last night’s Question Time audience. “I work bloody hard for my money, to provide for my children, to give them everything they’ve got, and you’re going to take it away from me and them. Shame on you!” But what should really frighten the government is who she used to vote for: the Tories.The “work penalty” – as some have begun calling the cuts to tax credits – will not just hammer poorer voters, who disproportionately tend to either vote Labour or not vote at all. Victims include middle-income Britons and, yes, those who plumped for the Tories in May.

That’s why David Cameron stood up on national television to pledge that tax credits were “not going to fall”. Millions of working families – “hard-working strivers”, as the Tories sometimes label them – are going to be significantly worse off, even with other measures taken into account. No wonder the government today stands accused of attempting to cover the impact of the work penalty. They are fully aware that middle-England Tory voters are among those who are going to start noticing their wallets getting lighter.

As one expert pollster points out, swing voters who are very likely to turn up to polling stations are among those being hit: the “quiet ones”, he calls them. The message the Tories are sending them, he writes, is: “We know you’re working, but we’re going to penalise you anyway.”