The UK must keep a "significant level" of social distancing until a vaccine for coronavirus is found, a scientist advising the government has said. 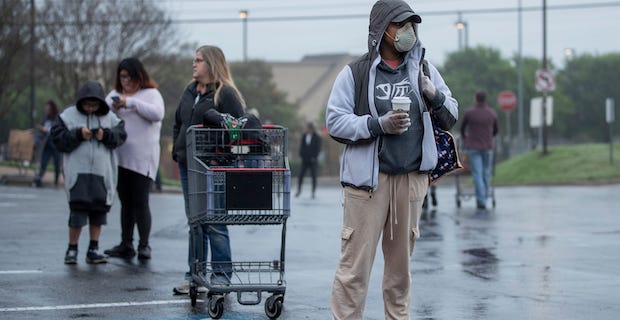 Prof Neil Ferguson told the BBC there was "little leeway" to relax measures without "something... in their place" - such as testing and contact-tracing. A three-week extension to the lockdown is expected to be announced later. Labour said it would support an extension, but called for details on how and when the lockdown will end. Prime Minister Boris Johnson introduced strict curbs on life in the UK on 23 March, as the government sought to limit the spread of the virus. Ministers are required by law to assess whether the rules are working, based on expert advice, every three weeks. The government - led by Foreign Secretary Dominic Raab as Mr Johnson continues to recover from the virus - will detail the outcome of the first assessment at the daily news conference later.

Meanwhile, more than nine in 10 people dying with coronavirus have an underlying health condition, analysis by the Office for National Statistics has found. According to the latest figures, which include hospital deaths only, 12,868 patients have died after testing positive for the virus in the UK.

'Not back to normal'

Speaking to BBC Radio 4's Today programme, Prof Ferguson, of Imperial College London, said easing the lockdown after another three weeks would depend on "how quickly case numbers go down". He said that required "a single-minded emphasis" in government and the health system on "scaling up testing and putting in place the ability to track down cases in the community and contact-trace". Prof Ferguson added: "Without that, our estimates show we have relatively little leeway; if we relax measures too much then we'll see a resurgence of transmission. "What we really need is the ability to put something in their place. If we want to open schools, let people get back to work, then we need to keep transmission down in another manner. "And I should say, it's not going to be going back to normal. We will have to maintain some level of social distancing, a significant level of social distancing, probably indefinitely until we have a vaccine available."

Keywords:
CoronavirusSocial DistancingVaccine
Your comment has been forwarded to the administrator for approval.×
Warning! Will constitute a criminal offense, illegal, threatening, offensive, insulting and swearing, derogatory, defamatory, vulgar, pornographic, indecent, personality rights, damaging or similar nature in the nature of all kinds of financial content, legal, criminal and administrative responsibility for the content of the sender member / members are belong.
Related News