Russia sends plane full of medical supplies to US 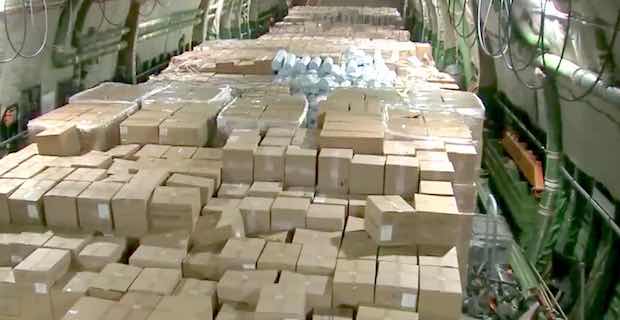 Russia has dispatched a cargo plane with masks and medical equipment to the US after Donald Trump accepted an offer of humanitarian aid from Vladimir Putin to fight the coronavirus outbreak. The plane, a Russian Antonov An-124-100 military transport, left from Chkalovsky airfield outside Moscow on Tuesday night and will arrive in the US on Wednesday after refuelling at Shannon airport in Ireland. Footage from the plane broadcast by Russian state television showed stacks of cardboard boxes in the cargo hold. The delivery is likely to stir controversy among critics of Trump, who have said Putin will portray the goodwill gesture as a public relations coup and use it to bolster Russia’s efforts to escape sanctions for meddling in the 2016 US elections. 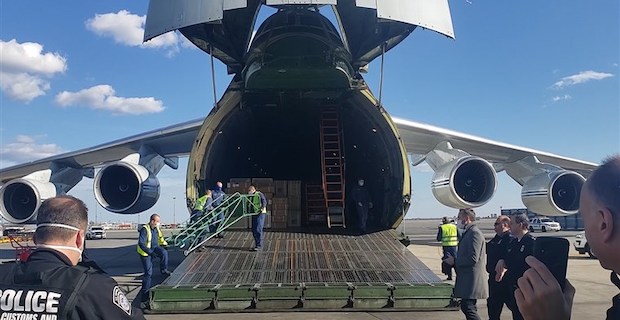 Masks and other medical equipment are also in short supply in Russia, where the number of infected with coronavirus rose by 440 on Wednesday to a confirmed 2,777 cases. The Moscow mayor, Sergei Sobyanin, warned Putin last week that the official tally of cases underestimated the severity of the outbreak. The US has more than 188,000 confirmed cases of coronavirus and more than 3,900 deaths attributed to the disease. Government scientists have said working models show tens, or even hundreds of thousands of people dying from the disease in the US alone. In an apparent error, Trump on Monday said the aid had already arrived from Russia, telling reporters in the White House Rose Garden: “Russia sent us a very, very large planeload of things, medical equipment, which was very nice.” It was the first mention of aid from Moscow.

Later, the Kremlin announced that Putin had offered Trump the aid during a one-on-one telephone conversation when the two sides discussed measures to fight coronavirus. “Trump gratefully accepted this humanitarian aid,” Putin spokesman Dmitri Peskov told reporters. “Now that this situation has affected everyone without exception and is global, there is no alternative to joint action in the spirit of partnership and mutual help.”

Keywords:
RussiaUS
Your comment has been forwarded to the administrator for approval.×
Warning! Will constitute a criminal offense, illegal, threatening, offensive, insulting and swearing, derogatory, defamatory, vulgar, pornographic, indecent, personality rights, damaging or similar nature in the nature of all kinds of financial content, legal, criminal and administrative responsibility for the content of the sender member / members are belong.
Related News