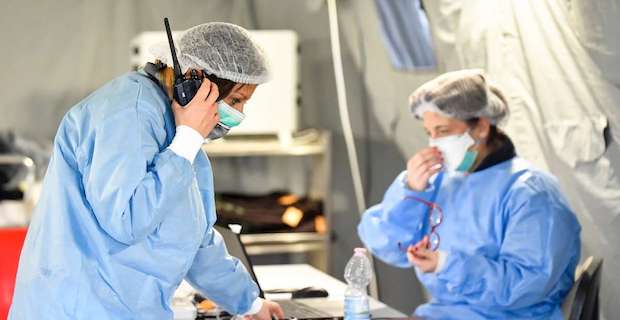 Fifty million face masks bought by the British government cannot be used by workers in the National Health service, local media reported on Thursday. The masks were ordered from London-based Ayanda Capital as part of a contract worth £252 million (over $331 million). They have ear loops rather than head loops, meaning they cannot be tied tightly enough to ensure proper protection.

Two groups, the Good Law Project and EveryDoctor, are now suing the government over the contract.

They estimate the faulty masks cost British taxpayers about £150 million (over $197 million).

Part of the controversy lies in the fact that Ayanda Capital is not actually a medical provider – it is an investment firm focused on currency trading, offshore property, and private equity and trade financing.

Julia Patterson, the founder of EveryDoctor, said: “It is horrifying that during the worst crisis in the NHS’ history, the government entrusted large sums of public money in the hands of companies with no experience in procuring safe PPE for healthcare workers.”

Rachel Reeves, an opposition Labour party politician, said: “It is astounding that ministers allowed the national PPE stockpile to run down and then spent millions with an offshore finance company with no history of providing vital equipment for the NHS.”

Layla Moran, chair of the all-party parliamentary group on coronavirus, said the government has “serious questions to answer over this shocking waste of taxpayers’ money.”

The government, though, said all contracts were signed after “necessary due diligence” and that it had “a robust process in place” to ensure safety of all frontline workers.

“Throughout this global pandemic, we have been working tirelessly to deliver PPE to protect people on the frontline. Over 2.4 billion items have been delivered and more than 30 billion have been ordered from UK-based manufacturers and international partners to provide a continuous supply, which meets the needs of health and social care staff both now and in the future,” a spokesman said.

“There is a robust process in place to ensure orders are of high quality and meet strict safety standards, with the necessary due diligence undertaken on all government contracts.”

Keywords:
NHSBritish GovermentFace Masks
Your comment has been forwarded to the administrator for approval.×
Warning! Will constitute a criminal offense, illegal, threatening, offensive, insulting and swearing, derogatory, defamatory, vulgar, pornographic, indecent, personality rights, damaging or similar nature in the nature of all kinds of financial content, legal, criminal and administrative responsibility for the content of the sender member / members are belong.
Related News