The 55-year-old star, who revealed she had been secretly battling breast cancer for a year in February 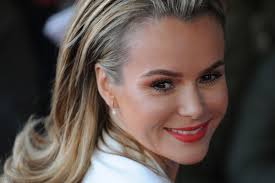 Carol McGiffin made her return to TV last night after her battle with breast cancer. The former Loose Women panelist, who is now in remission, appeared on Big Brother's Bit On The Side to give her opinion on the new series, which kicked off this week. She looked glowing as she sat alongside pal Rylan Clark on the Channel 5 spin-off show, who ended up getting a bit teary about her being back following her stint in the CBB house in 2013.
The 55-year-old star, who revealed she had been secretly battling breast cancer for a year in February, is still undergoing chemotherapy and radiotherapy treatment as well as a mastectomy. Carol looked radiant in a smart grey jacket and was rocking her new short hair do, while Twitter was flooded with messages from well wishers on during her TV appearance after she posted herself. "I'm doing bbbots tonight, first bit of telly for over a year due to unforseen circumstances. Can't wait to see you she wrote on the social media site. One cheeky fan thought she looked so well they wrote: "Carol McGiffin looks proper hot BBBOTS. Woah, go Carol, Rylan also posted a pic of the pair and wrote:
The best thing about my day was getting a cuddle from my McGiff adore this woman with all my heart The star, who is engaged to Mark Cassidy, now wants her life to return to as normal as possible as she continues to get better. The star previously told The Sunday People, "I kept it a secret because I didn't want anyone feeling sorry for me.
Your comment has been forwarded to the administrator for approval.×
Warning! Will constitute a criminal offense, illegal, threatening, offensive, insulting and swearing, derogatory, defamatory, vulgar, pornographic, indecent, personality rights, damaging or similar nature in the nature of all kinds of financial content, legal, criminal and administrative responsibility for the content of the sender member / members are belong.
Related News