Yunus Emre Institute in London is delighted to organise the Music Beyond Borders, A Guitar Oud Harmony 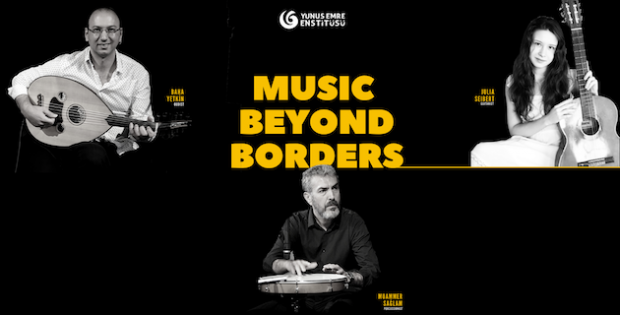 Performing compositions from Turkish and Western musical cultures, Yunus Emre Institute in London is delighted to organise the "Music Beyond Borders: A Guitar & Oud Harmony" on Thursday 17th February 2022, at 7 pm. This cross-cultural concert will feature a trio of excellent musicians including Guitarist Julia Seibert, Oudist Baha Yetkin and Percussionist Muammer Sağlam. Bringing together two musical traditions to forge a cultural bridge between two worlds, this concert hopes to bring people together through music.Music, like many elements that make up culture, thrives on cultural encounters and is enhanced by new inspirations. Both Turkish and Western musical traditions are immensely complex and share as many elements as they contrast. Influencing and inspiring each other for centuries, when the two traditions are combined, the results can be breathtaking. 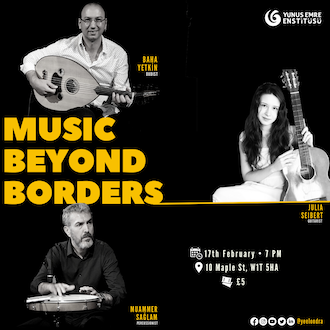 Join us at Yunus Emre Institute in London as we take a fresh look at the interaction between Eastern and Western musical culture. This concert will entice fans of both traditions while showing that the experience of culture and our lived experiences are not bound by borders but sing in harmony.

Keywords:
Music Beyond BordersA GuitarA Guitar Oud HarmonyYunus Emre Institute In LondonMuammer SağlamOudist Baha Yetkin
Your comment has been forwarded to the administrator for approval.×
Warning! Will constitute a criminal offense, illegal, threatening, offensive, insulting and swearing, derogatory, defamatory, vulgar, pornographic, indecent, personality rights, damaging or similar nature in the nature of all kinds of financial content, legal, criminal and administrative responsibility for the content of the sender member / members are belong.
Related News