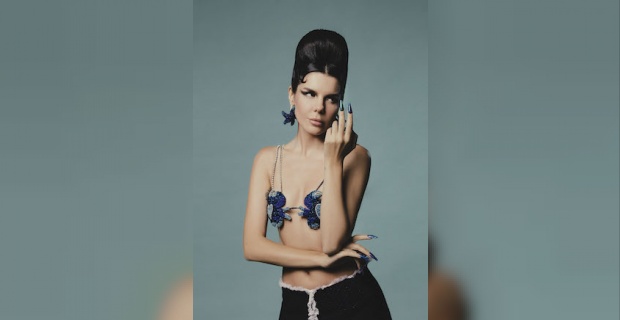 AVRUPA TIMES-Building upon her mélange of Turkish psychedelia, empowered commentary and retro- futurist sonics, her vision is more personal and uncompromising than ever before. "Her voice is a mesmerizing thing, deep and plummy enough to shake trees and stir hearts." – Pitchfork. Courage. Bravery. Daring. Those are the watch words that guided Turkey’s Gaye Su Akyol when she was making 'Anadolu Ejderi', her first full-length release in four years. Already lauded for her startling, innovative mix of Turkish psychedelia and folk song, surf music and ʼ90s Western rock, a global sweet spot where Anatolian music heroine Selda Bağcan rubbed shoulders with Kurt Cobain, Akyol was ready to expand her vision after a relentless period on the road.

“I was tired of touring,” she says. “I really needed a break, some fresh air.” The Covid pandemic gave her that, even if it was the wrong reasons.

“With everything closed, we all had to sit at home. The isolation gave me time to write. I ended up with over 100 songs. I tried to broaden the palette: to start with Anatolian folk and pop, then see how to add African and Middle Eastern sounds, the soul revolution, disco, and rock from other cultures. The music is still quite psychedelic, but it connects to different areas, all the pop genres I love so much. The hard part was picking the right songs and the correct order.”
Everything on 'Anadolu Ejderi' – the titles translates as “Anatolian Dragon” – breathes fire. It takes chances, the lyrics offer an exploration of politics in today’s Turkey. The personal is very much part of that.

“In a political climate where a woman's commitment to her passion, to falling in love, to her sexual identity is revolutionary enough, she is deeply passionate and able to express her love freely,” Akyol notes. “It would have been easy to sit in the comfort zone of the past.” 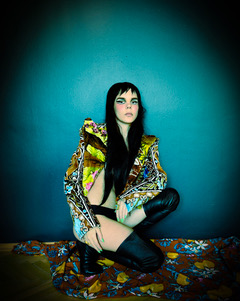 Instead, she strode over all those barriers. While it can hark back to the beauty of Istanbul before the coups that changed the place, when the country shifted, 'Anadolu Ejderi' is a record that’s filled with possibilities and dives into the unexpected. It’s there in the dancing joy of slipping a disco section into the title track or the stark beauty of the acoustic openings to “Yaram Derin Derin Kanar” and “Biz Ne Zaman Düşman Olduk,” which arrive as shocks to the system. If you thought you knew what to expect in Gaye Su Akyol’s music, things have changed.

“This is the most freeing thing I’ve done,” she observes. “The lyrics, the songs, this is music I need to hear. It’s a manifesto: I’m back with rock’n’roll, fused with post-punk, stoner rock, Turkish psychedelia, blood sweat and tears, all crowded with herds of wild horses. This is a time mission. It takes you where you want to go.”

From the years ahead to the years behind, Akyol’s lyrics lure, puzzle, and often take by surprise, as with the album’s final track, “Içinde Uyanıyoruz Hakikatin” (“We Are Waking Up In Reality”). After an ominous opening keyboard line, her voice offers the astonishing lines, “I’m Syd Barrett of Pink Floyd/ Brian Jones of Rolling Stones.” Musically it can seem like the closest to a straightforward Western song she’s come, but, Akyol notes, “you also hear non-existent Turkish folk”. The line “Anadol is my time machine, I pulled over in 1980 of September 12” brings it all into sharp focus as a lament for her country before that year’s coup.
Akyol is an astute observer of what’s happened to her country. The tales history tells are important to her. That first upheaval of 1980 was followed by another in 1997, and her cries for what’s lost stand in her words. The political allusions are often carefully oblique, but they’re there. The hurt, though, is very tangible in lines like “I’m an Olympic swimmer in a razorblade pool” or “In my heart, there’s a cold war/ Orphan kids in its streets.” These are cries from the soul.
“Things were lost in a city we loved,” she says, “Politically and economically we’re witnessing a country in collapse. There is a lost culture in this country, so much has gone. There are lots of memories of pain in this country, and pain is bigger than anything. I had a chance to see the beauty of the past. Now it’s going down and down, tearing at the deep beauty of this country.”

But on 'Anadolu Ejderi' the Anatolian dragon is rising, drawing on those old glories and spreading outwards. 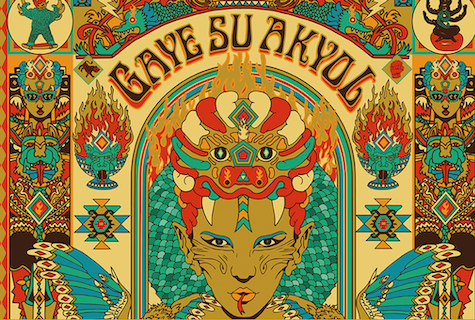 “It’s the awakening of a mythological dragon from a deep sleep,” Akyol says. “A resistance that reiterates that the only remedy against pure evil is collective action.”
It’s an evolution of the music she’s made before, Akyol says. “I love to put imagination in my music, to take listeners to places they haven’t been before. It has everything that I have in my head, lyrically, musically, everything I love most. It goes wider and wilder.”
That’s apparent in the instrumentation, forging closer connections between Turkey’s past and its present. The rock guitar, bass and drum trio are now accompanied by traditional instruments such as violin, oud, electro baglama, cümbüş, sazbüş.
“I was putting different materials together,” she recalls. “You don’t feel like anything is safe, and that was what I needed. Lyrically, musically, this is a freedom. It’s a manifesto. As a lover of Turkish psychedelia, I knew I had to go deep and extend genres. I feel like a scientist as it turned into a chemical reaction that expanded the boundaries of genres I was influenced by.”
It’s her giant step, her leap into something more believed than known.
With 'Anadolu Ejderi', Akyol says, “I’m telling stories for the future.” To do that takes courage. It takes bravery and daring. Listen, and you’ll hear the roar of the Anatolian dragon as it roars.

'Anadolu Ejderi' (“Anatolian Dragon”) is the fourth album in my discography.
As on the other albums, it is a completely independent DIY story that draws its strength from its freedom and lack of accountability to anyone.
It is released by our boutique record label Dunganga Records in Turkey and Glitterbeat Records worldwide, as were the albums 'Hologram İmparatorluğu' and 'İstikrarlı Hayal Hakikattir'.
This album is the awakening of a mythological dragon from deep sleep. The simultaneous transformation of millions of cells into an organism, waiting for a sign in its cave. A resistance that reiterates that the only remedy against pure evil is collective action, in a fairy tale where everyone has to learn to be their own superhero, a journey with a submarine company in the ocean of memories of a society whose memory has been stolen. It is a fiction of truth in response to the question of “what would it be like otherwise” arising from the destroyed cities and the cultures that were almost destroyed together with the city, the meanings that are intertwined, and the ideas that cannot be discussed and matured. In a political climate where a woman's commitment to her passion, to falling in love, to her sexual identity is revolutionary enough, she is deeply passionate and able to express her love freely.

A sonic expansion and invention, a weave where sounds, words, and notions that are not so predictable, come together to mingle and dance in new ways.
Musically, this album was an adventure for me to go beyond the known limits and pursue brand new sounds, in this sense, I can say that it is my most liberated and authentic production ever. I felt like a scientist as it turned into a chemical reaction that expanded the boundaries of the genres I was influenced by, Anatolian Pop Folk, Classical Turkish Music, and Turkish Psychedelic Rock with dark beats, post punk, jazz, surf, stoner rock and touches of disco, and brought them together with brand new genres; in addition to these, it is possible to follow the traces of hip hop and industrial rock in “Biz Ne Zaman Düşman Olduk” or “Bu Izdırabın Panzehiri,” 90s Turkish pop, Middle Eastern influences in “Vurgunum Ama Acelesi Yok,”and grunge in “Yaram Derin Derin Kanar.”
There are also innovations in terms of instrumentation; the guitar, bass and drum trio are accompanied by violin, oud but also traditional Turkish instruments such as electro baglama, cümbüş, sazbüş.
So what’s hidden in the DNA of this rock’n’roll rocket coming up in its cape of passionate love and rebellion? What’s under the skin of the fierce yet restorative yearning held for another, in a country where it’s a luxury and a political stance to even fall in love?
Rimbaud, in his ‘Letters of the Seer’ writes “I is another.” The other is again ‘itself’. All roads lead here. Aşık Veysel says “Your beauty isn’t worth a dime, if it weren’t for my love.” A new state of being, constantly changing in the mirror of another, transforming, rotating, becoming.
The other in which one goes searching for one’s own cave, one’s place in neverland (one’s existence in the land of nil), one’s fears, one’s lost goddess, both feminine and masculine, and a proof of being one with the universe; is that other in fact one’s own self? Looking into the mirror you tell your story. Does reality commence in that moment?
I am back with a meteor of fresh Turkish psychedelia, fused with my own musical and philosophical journey spiced with dance, pain, hope, blood, sweat and tears, crowded with herds of wild horses.