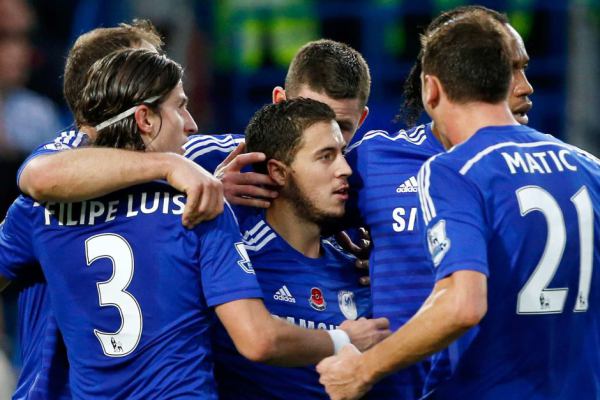 Mane kept cool when one-on-one with Thibaut Courtois and helped the ball over the advancing goalkeeper for his fourth Premier League goal of the season as well as his second in three days. Chelsea continued to dominate the ball without showing too many signs of coming up with an equaliser as Southampton defended with tenacity, while retaining a threat at the other end. Jose Mourinho criticises refereeSaido Mane had opened the scoring for Saints but Eden Hazard found an equaliser just before half-time and a Chelsea winner looked inevitable as they enjoyed total domination after the interval.

But despite Morgan Schneiderlin’s late sending-off, Ronald Koeman’s side held firm to claim a share of the points and underline their recent return to form after overcoming a run of five defeats in all competitions. The result also ends a sequence of three successive victories for Jose Mourinho’s men but is enough to ensure that Chelsea will start 2015 clear of Manchester City at the top of the table. Koeman had been forced to change his defence with Ryan Bertrand ineligible to feature against his parent club and that presented an opportunity for 19-year-old left-back Matt Targett.

But with Nathaniel Clyne injured, Southampton’s makeshift back four also came under considerable pressure down their right flank in the early stages as Chelsea pushed for an opener. Fraser Forster did well to tip a left-wing corner away from the head of John Terry but the home side also went close when Jose Fonte almost got on the end of Mane’s header across goal. In the 17th minute, the Senegal striker did make the breakthrough himself when Terry attempted to play the offside trap but was caught out as Dusan Tadic lofted the ball behind the defence.

But just when it seemed as though Saints would reach the break with their lead intact, Hazard finally took advantage of the space out wide to level the scores in first-half stoppage time. Picking up the ball on the left, he danced beyond the retreating Maya Yoshida before cutting inside past Toby Alderweireld and firing a low shot into the far corner of Forster’s net. That this was Chelsea’s only shot on target in the opening 45 minutes was testament to the efforts of Koeman’s side but also an indication of the ruthless nature of the visitors.